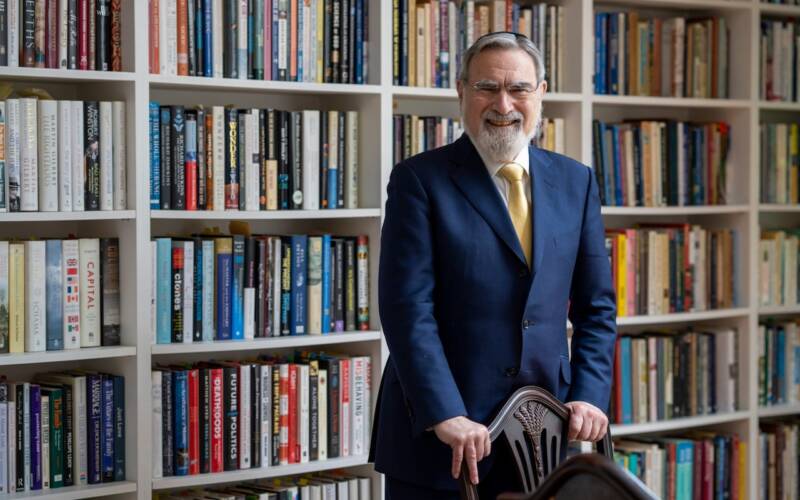 To mark the first yahrzeit (anniversary of the passing of) Rabbi Sacks, on 25-26 October 2021 (20 Marcheshvan 5782), The Rabbi Sacks Legacy launched a new programme of learning, and invited individuals, families, schools, organisations, and communities from around the world to come together to remember the impact Rabbi Sacks made on the Jewish world and beyond, and to learn and teach some of his Torah in his memory.

Over 150 groups around the world participated in the inaugural annual event.

Perhaps the most defining feature of my father’s life, one that I don’t think I fully appreciated until after he died, was that he learned, and learned, and continued to learn every single day, until his last. He learned from books, from text, from laws. He learned from history and from world events. But, mainly, he learned from people. He would seek out people to learn from, from every possible path of life. And he would seek out what he could learn from everyone he met.

In this coming week’s parsha Chayei Sarah, we read the before meeting his future wife for the first time, vayeitse Yiztchak lsuach basader lifnot arev, “Yitzchak had gone out in the field before evening to meditate.”

The Talmud in Brachot commenting on the choice of the word lasuach, usually meaning ‘to talk’ or ‘to converse’, states ein sicha ela tefilah, “There is no conversation without prayer” or, as my father explains it, conversation is a form of prayer.

He writes on this parsha, “Conversation is a prayer, for in true conversation I open myself up to the reality of another person. I enter his or her world. I begin to see things from a perspective, not my own. A genuine human conversation is a preparation for and a microcosmic version of the act of prayer.”

Prayer, the prayer model by Yitzchak specifically, is not monologue, but dialogue. Prayer as sicha, conversation. So it is fitting that through this initiative, Communities in Conversation, all over the world, individuals, communities, and organisations will mark my father’s yahrzeit, not simply from learning from what he wrote, but through conversation, coming together, asking, challenging, listening, and learning from each other.

It means more than I can say to us, his family, that you were helping to carry forward his teaching in this beautiful way. He wrote of Moshe’s death at the end of the Torah, “We will not complete the journey. Therefore, we each must inspire others to continue what we began.” Thank you for continuing the work my father began, and may the work he began be a blessing for all of us.

Five units of learning were produced by the Rabbi Sacks Legacy, and each one included a video, multiple sources, and discussion questions to guide participating groups (and individuals) through a particular focus of Rabbi Sacks’ writings. The resources are available to download on the main Communities in Conversation page.

If you or your community, organisation, or school would like to get involved, or learn more about this initiative in the future, please contact Louise@RabbiSacks.org.

May the soul of Rabbi Sacks be elevated in merit of the learning we will do in his memory.