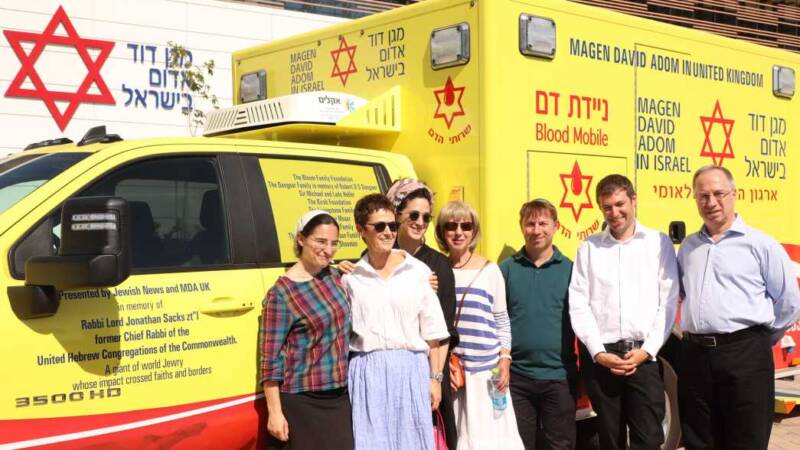 A bloodmobile donated to Magen David Adom (MDA) in memory of Rabbi Lord Jonathan Sacks was dedicated in Israel this week.

The tribute – conceived by Jewish News’ co-publisher Justin Cohen after Lord Sacks’ untimely death in November 2020 – was unveiled after a fundraising drive by the Jewish News. Together with Magen David Adom UK, they raised £135,000 from their supporters to enable the funds for this life-saving vehicle. The new bloodmobile will travel the country to collect donations from up to 80 blood donors a day, with each unit split between three recipients, potentially saving thousands of lives each year.

In Israel around 95 percent of daily blood donations are collected by such mobile vehicles at schools, universities, and other institutions, but some of the fleet is nearing two decades old and in urgent need of replacement.

The Sacks bloodmobile will ultimately be stationed at MDA’s new state-of-the-art blood bank in Ramla, which it is hoped will enable the collection of 500,000 units a year – double current capacity.

The facility also includes a vault that is capable of withstanding a direct missile hit to hold blood supplies and Israel’s only human milk bank to support premature babies.

Members of the Sacks family and the Rabbi Sacks Legacy team joined MDA leaders for the ceremony at the organisation’s new National Blood and Logistics Centre in Ramla to dedicate the bloodmobile in memory of Rabbi Sacks. An inscription on one side of the vehicle describes him as a “giant of world Jewry whose impact crossed faiths and borders”. The other side contains a pertinent quote from Rabbi Sacks: “At the heart of Judaism is the principle of the sanctity of life.”

British ambassador to Israel Neil Wigan said: “Rabbi Lord Sacks had a truly global impact and was an exceptional ambassador for the Jewish people. It is fitting that part of his lasting legacy will be to save lives on the streets of Israel.”

Daniel Burger and Russell Jacobs, CEO and chair of MDA UK, agreed that: “Nothing is more important in Judaism than saving a life no matter a person’s religion or background – an ethos at the core of Magen David Adom’s work. As well as being a passionate voice for Israel and active supporter of MDA UK, Rabbi Sacks taught about the importance of respect for all and so it feels particularly fitting to see his name adorning a vehicle that will help save countless lives in the years to come.”

The event was also addressed by Dr Eilat Shinar, head of MDA’s blood services, by Lady Elaine Sacks, and by Jewish News editor Richard Ferrer, who said: “King Charles described his great friend Rabbi Sacks as a light unto his nation. With the dedication of this life-saving MDA vehicle, the great man’s light shines brighter still.”

Lady Elaine Sacks said at the dedication ceremony, “To remember my dear husband in this life saving way, here in Eretz Yisrael – is so very special.” She was joined at the ceremony by family members such as her son Josh, her son-in-law Elliot Goldstein, and Lord Sacks’ brother Elliot, and she was presented with a mezuzah replicating those mezuzot currently adorning the door frames of the blood centre, by MDA Israel deputy director general Alon Fridman. Thanking the Jewish News team for coming up with the idea, she said this was the first charity project her family was asked to endorse after the sudden death of her husband.

Aryeh Myers, of MDA’s international division, recalled the former Chief Rabbi’s participation in Bnei Akiva’s Yom Haatzmaut celebrations at Kinloss. Pride in Judaism and a love of Israel “emanated not only from the words he spoke but from his entire being,” he said. “He didn’t just teach Judaism. He lived it, loved it and spread its importance and relevance, across all corners of the world.”

The bloodmobile also bears the name of neurosurgeon Dr David Shooman from Leeds, who passed away after a cycling accident in Israel and whose family and friends wanted to contribute in his honour. Gur, the eight-year-old son he never got to meet, was also in attendance and said it was “an honour” for his dad’s name to be on the vehicle, adding: “I hope it saves many lives.”