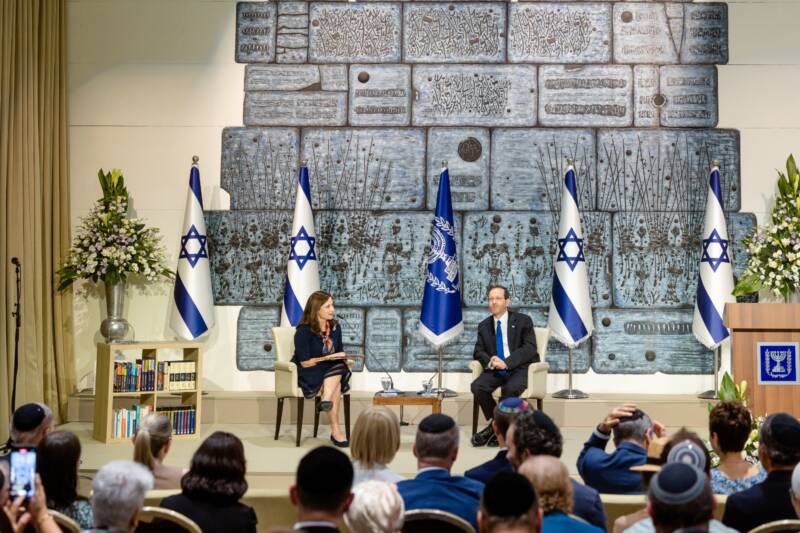 The event was introduced by Michal Cotler-Wunsh, a trustee of the Rabbi Sacks Legacy and a former Member of Knesset. She noted that everyone present, and so many watching the livestream all around the world, are disciples of Rabbi Sacks, and quoted Rabbi Sacks’ prophetic words that “leaders see the destination, begin the journey, and leave behind them those who will continue it. That is enough to endow a life with immortality.” Ehud Banai provided the musical interludes, performing “Canaanite Blues” and “Into the Light”.

The conversation between Dr. Erica Brown and President Herzog drew on ideas shared in many of the books penned by Rabbi Jonathan Sacks, and how we can embody those ideas today. President Herzog brought with him a letter written by his own father, President Chaim Herzog, to Rabbi Sacks, thanking his for his “incredible drasha at Marble Arch Synagogue” as he recalled meetings with the late Chief Rabbi as far back as 1984 and 1993.

President Herzog said “We will see Rabbi Sacks’ legacy growing from generation to generation. It will change the dialogue in the Jewish world. The real impact that Rabbi Sacks had on me is with the weekly reading of the Torah portion. I say so because I continue reading his books, and they are a fountain of strength, an unbelievable fountain of originality, of ideas, of understanding the content of the Bible, and of course with immense sources of wisdom, knowledge from all facets of humanity.”

A new film was shown during the event, featuring recent interviews with many leaders in many facets Israeli society who have felt Rabbi Sacks’ impact on their life, including Prime Minister Yair Lapid, Chief Rabbi Yisrael Meir Lau, Justice Esther Hayut, Miriam Peretz, and Natan Sharansky.

Our sincere thanks to Wohl Legacy, who sponsored the event, and – as we were reminded at the event – Maurice and Vivienne Wohl were friends and supporters of Rabbi Sacks even before he became Chief Rabbi in 1991.

Lady Sacks closed the event, thanking everyone in the room, as well as everyone watching at home, and wishing one and all a Shana Tova.