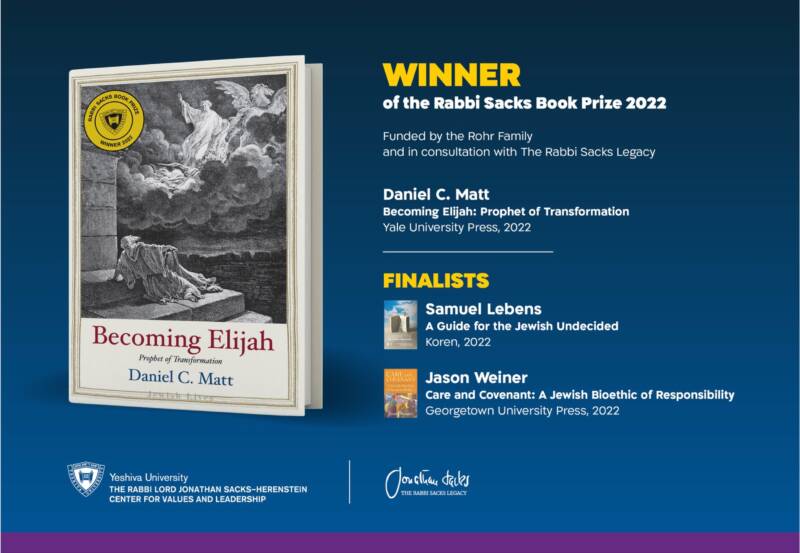 The Rabbi Lord Jonathan Sacks-Herenstein Center has announced the winner and finalists of the inaugural Rabbi Sacks Book Prize, funded by a generous gift from the Rohr Family.

The judging panel looked for books published in 2022 which were both deeply sourced in Jewish texts, and reflected a broad appeal within and beyond the Jewish community. All selections are in keeping with the scholarly legacy of Rabbi Lord Jonathan Sacks and in consultation with the Rabbi Sacks Legacy Trust.

“Rabbi Sacks believed profoundly in the power of the written word,” said Dr. Erica Brown, Vice Provost for Values and Leadership at Yeshiva University and founding director of its Rabbi Lord Jonathan Sacks-Herenstein Center. “Presenting a new literary award in his honour is an important recognition of his commitment to the flourishing of the Jewish bookshelf.”

The inaugural Rabbi Sacks Book Prize of $50,000 has been awarded to Becoming Elijah: Prophet of Transformation (Yale University Press, 2022) by Professor Daniel Matt.

A volume in Yale University Press’ Jewish Lives Series, Becoming Elijah traces how depictions of the prophet transform from the Bible to Rabbinic Judaism, Kabbalah and Jewish ritual.

In a sophisticated, yet accessible manner, Matt, a scholar of Kabbalah, brings the prophet to life as he comprehensively chronicles the diverse references to Elijah from history and faith traditions. He explains how Elijah fills a need for hope and for justice; though his identity is variable, it is shaped by an ethical imperative that continues to inspire.

The prize-winning book can be purchased here.

A Guide for the Jewish Undecided: A Philosopher Makes the Case for Orthodox Judaism (Koren, 2022) by Professor Samuel Lebens, can be purchased here.

Care and Covenant: A Jewish Bioethic of Responsibility (Georgetown University Press, 2022) by Rabbi Dr. Jason Weiner, can be purchased here.