The Sacks – Herenstein Center for Values and Leadership at Yeshiva University 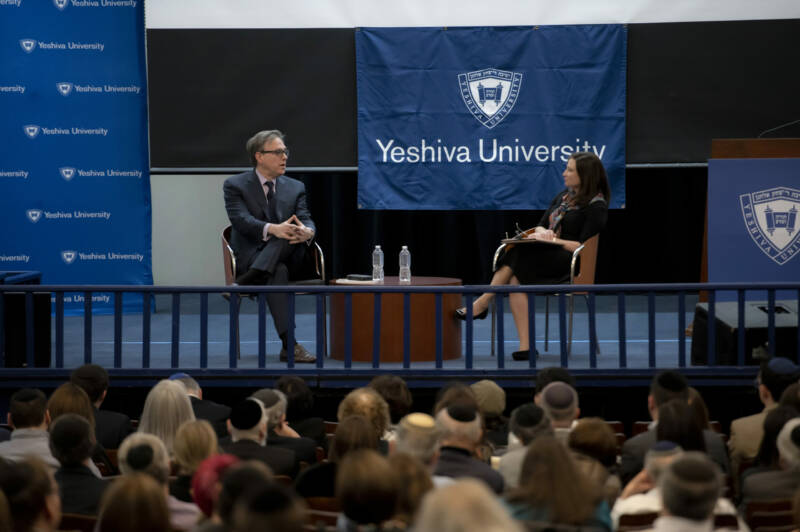 The Rabbi Lord Jonathan Sacks – Herenstein Center for Values and Leadership has been established by Yeshiva University, dedicated to the dissemination of Rabbi Sacks’ leadership lessons and values in classrooms across communities and through public discussion.

Ahead of the launch, Yeshiva University President, Rabbi Dr. Ari Berman said: “Rabbi Lord Jonathan Sacks uniquely exemplified and articulated Yeshiva University’s world view and mission to the broader Jewish people and the world at large. While his loss left us bereft, his words and teachings continue to inspire and inform. This new center, powered by his teachings, will be dedicated to both transmitting values and educating the next generations’ leaders.”

Here are some of the highlights from the inaugural event in April 2022 entitled Passover Redemption and Religious Freedom which took place at the Nathan Lamport Auditorium at Zysman Hall on YU’s Wilf campus in Washington Heights:

Dr. Erica Brown discussed the blessing on fruit trees, reflecting the potential for renewal and hopeful idealism. She explained that that can serve as a metaphor for the inauguration of the Sacks – Herenstein Center, which will grow leaders by promulgating the values of Rabbi Sacks through academic initiatives for Yeshiva University students as well as the broader community.

Gila Sacks, Rabbi Sacks’ daughter, reflected upon memories of her father’s Pesach seder and his powerful lessons about freedom and moral responsibility.

Rabbi Dr. Ari Berman described our contemporary need not only for the fighting Jew to combat antisemitism but also for the inspiring Jew to infuse Jewish values into the world, as embodied by Rabbi Sacks.

Andrew Herenstein described the motivation for his family to support the founding of the Sacks – Herenstein Center and the perpetuation of Rabbi Sacks’ impact upon global Jewry.

Bret Stephens, in conversation with Dr. Erica Brown, insightfully discussed some of the most pressing issues of today, including religious freedom, antisemitism, micro-aggression on college campuses, and cancel culture. He shared his perspective on the war in Ukraine and Israel’s stance in the conflict as he stresses the obligation for moral values to define strategic interests.

Find out more about the Rabbi Lord Jonathan Sacks – Herenstein Center for Values and Leadership by visiting yu.edu/sacks-center.