Have you ever wondered what Professor Ludwig Guttmann (the founder of the Paralympic Games), Rosh Hashanah and Yom Kippur have in common? Watch the Chief Rabbi’s inspirational pre-Selichot address to learn how Rabbi Sacks linked them together.

K’vod Mara D’Atra, Rabbi Harris, Dayan Gelley, President of the United Synagogue, President of the Board of Deputies, distinguished guests. It is an honour to be with you and to thank your outstanding Rabbi, Rabbi Michael Harris, and your wonderful Chair of Hampstead, Michael Haringman, and all the members of Hampstead Shul for hosting us on this – what, the third occasion is it? Third occasion. And I cannot imagine a more beautiful setting for such a powerful experience as Selichot.

I want to thank in advance on your behalf the members of the Shabbaton Choir, who each year lift us to the real spiritual heights; to Rabbi Lionel Rosenfeld, whose whole idea this was. He conceived it and turned it into the thing of beauty it is. To Chazzan Jonny Turgel, whose lovely singing pierces the heavens and the heart, to our young soloists this evening, Netanel Rubin and Gideon Kaplan, to Stephen Levey who conducts the choir and has composed some of its most beautiful memories. And to all of you members of the choir, thank you for lifting us, and may Hashem bless you. To everyone who is here, let me first of all say that for a shul service to create a traffic jam in Hampstead at 11.30 at night tells you we’ve achieved something – I don’t know what, but something. And finally, by way of introduction, let me thank you, Rabbi Harris for planning that diary out so beautifully.

So I can tell you at 11.30 this time next year, I will stand up as a Chief Rabbi. At 12:00, I will sit down as an ordinary Jew. But in the meantime, at 12:00 next year and 12:00 this year, every one of you will be lifted to being a Chief Rabbi or a Chief Rebbetzen by the inspiration of the choir. May Hashem let us all grow, and may He write us in the Book of Life. Amen.

Friends, Jews didn’t invent the Olympics. We’re not that kind of people. But a Jew did invent the Paralympics. And a week or two back the BBC told his story in a film called “The Best of Men”. I don’t know if you saw this film. It’s a remarkable film. It is one of the most inspirational films I have ever seen. Let me remind you of the story. It’s about a German Jewish refugee to this country called Dr Ludwig Guttmann. By 1933, Ludwig Guttmann, a proud and committed Jew, an Orthodox Jew, was already then considered the top neurosurgeon in the whole of Germany.

But of course, when Hitler came to power, all Jews were thrown out of the professions. The only place he could work was in the Jewish Hospital in Breslau. It was there, five years later, on the day after Kristallnacht, as mobs were roaming Germany, attacking Jews and gathering them to send them to concentration camps, that Dr. Guttmann told the hospital staff to admit any Jew without question. And that day, he saved 60 lives. But in 1939, he had to leave and come to Britain, where his extraordinary skills were immediately recognised, in particular his unique expertise, which dated back from one of the first patients he ever treated in 1917, in treating paraplegics – people with injuries to the spinal cord.

In 1943, he was asked by the British government to set up the National Spinal Injuries Centre at Stoke Mandeville Hospital in Buckinghamshire, the first of its kind in Britain. And the film was about his time there, from 1944 when it opened, until 1948. And what a story it tells.

When Guttmann arrived, it was assumed that since paraplegics were incurable, they had to be sedated and kept bedridden and left to die. The mortality rate in those years was 80%. There were a few survivors. They were seen as incurable. They were “useless, hopeless cripples.” There was no encouragement to them to return to normal life. And life-expectancy after becoming a paraplegic in those days was three months. And that was the accepted practice: they were sedated, bedridden and left to die.

And you see, throughout this film, these people come slowly back to life again and find passion and the strength to dream and the courage to hope. At first, everyone opposed him, the nurses, the doctors, the army. They thought he was mad. They thought he was attempting the impossible. In one scene, one of his fellow doctors accuses him and calls for him to be disciplined. “Can’t you see,” he says, “They are moribund. They are cripples. They’re never going to walk. They’re never going to lead a normal life. Leave them to die. Who do you think they are?”

And Guttmann looks at him and says, “Who do I think they are? The best of men.” And with absolute determination, he kept going and they kept growing, and they rediscovered their love of life. It wasn’t without pain. Sometimes it came with great inner conflict. But Guttmann realised that sport was the thing, and he developed from a local competition to a national competition to, in 1948, the first international competition, a parallel Olympics. And it kept going until 1960, when the first Paralympic Games took place in Rome. And this year, it became the biggest ever with 4,200 athletes from 164 countries. And his daughter, Eva Loeffler, became the mayor – is the mayor right now – of the Athletes’ Village.

And this year, everyone who watched those games realised what a transformation this one man had brought about in the way we regard people who are handicapped or disabled. One man changed the world for a whole group in our society, for a whole group in every society. Why? I believe because Guttmann was a Jew, a committed Jew. He was a Jewish student in the 1920s, aware of the antisemitism in Germany, and already then he had helped create a group like our CST, to get the Jewish students to do sport and practise self-defence, so that in his words, “Nobody need ever feel ashamed to be a Jew.”

When he came to Britain, he was a member of the Oxford Jewish community, and the Reverend Malcolm Weisman tells me he was an active member of the Jewish community in High Wycombe. And when, in 1968, Mexico backed out of holding the games, he had them held in Ramat Gan in Israel. And I have to tell you, I hear it was a most moving occasion this year that his daughter, together with the Jewish participants in the Paralympics, held the Kabbalat Shabbat service together at the beginning of the games.

But above all, Guttmann showed what it is to live and act as a Jew. He knew that life is sacred. He knew that Moshe Rabbeinu left ringing in our ears “Uvacharta vachaim” – Choose life. Don’t give in to death. He knew that every human being, however injured, is b’tzelem Elokim, in the image and likeness of God. He knew that luchot veshivrei luchot munachim ba’aron that even the fragments, the broken fragments of the Tablets, still sat in the Ark together with the complete Tablets. They too were holy. They too had their own integrity. He understood that refuat hanefesh, healing the soul, goes hand in hand with refuat haguf, healing the body.

He knew that to be a Jew is to be an agent of hope in a world where others can only despair. He knew that sometimes you have to take difficult stands, that Avraham was called “Ha’Ivri”, the Hebrew, because kol ha’olam be’ever ha’echad vehu ba’ever hasheini – sometimes the whole world is on one side and we have to be on the other, for the sake of truth and humanity in life. What a man this was. Ashrei ha’am shekacha loh – happy is the people who has people in it like this.

Friends, we live in a physical world. And the result of that fact is that we can see other people’s bodies. What we can’t see is other people’s souls. But please do a thought experiment with me for a moment.

Imagine a world where the opposite was the case: we couldn’t see other people’s bodies, but we could see other people’s souls. How many of us in such a world would be full-bodied, would be in perfect condition? Adam ein tzaddik ba’aretz – there is no one on Earth, we believe, who never sins. Not one of us who doesn’t have, somewhere in our soul, in our spiritual being, some injury, some missing limb, some muscles that have become atrophied through lack of use.

And as I watched that film, I suddenly realised that at this time of the year, Hashem comes to us lehavdil, the way Dr. Guttmann came to his patients. And He says to us, “Don’t lie there and accept yourself the way you are! Sit up, get out of bed. Tefillah, teshuvah, tzedakah! Show the world, show yourself that you can really daven, that you can repent and become a better person than you were, that you can give to others and make the world a better place. Leave your comfort zone.

When Rachel, the woman a young man called Akiva wanted to marry, said to him, “No, I will not marry you who cannot even read an Aleph Bet, until you learn.” It hurt Rabbi Akiva, a grown man, to sit and learn Aleph Bet. But because of that, he became the greatest Rabbi of his age, one of the greatest of any age. It hurts when you leave your comfort zone. It hurts when you try to do something for the first time, whether that’s davening daily or really keeping Shabbos properly, or learning at a level you never did before. It hurts. And yet God says, you have to do it.

Friends, this year, make a decision. Choose one area in Jewish life and make a decision to leave your comfort zone. Do something difficult. Do something you never did before, whatever it is, whether it’s visiting the sick or volunteering for one of our organisations, or reaching out to the lonely in our community or inviting students for Shabbos or learning something you never learned before. Let us make a decision to live a more active Jewish life, and we will find that it will give us more life. In this race, there are no medals, because in this race, there are no losers. What matters is that spiritually we get out of our beds and we learn to live more deeply. May we be inspired by the memory of one who gave a whole group of people back their life. And may Hashem write all of us BeSefer HaChaim, in the Book of Life. 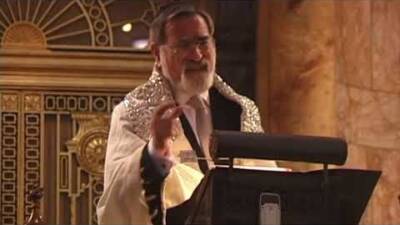 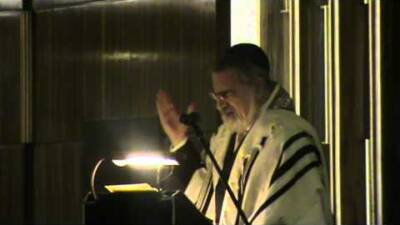 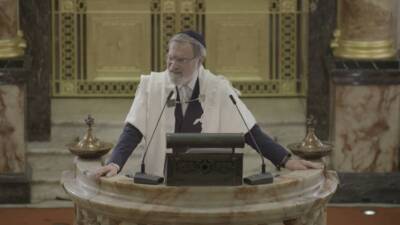