On CNN GPS with Fareed Zakaria 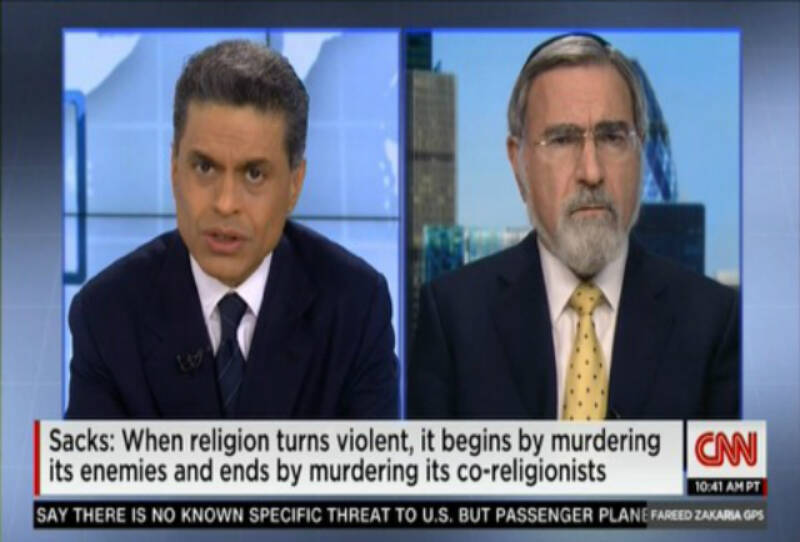 On 22nd November 2015, Rabbi Sacks was interviewed by Fareed Zakaria to discuss the recent terrorist attacks in Paris, the themes his book Not in God’s Name, and the challenge of religious extremism on CNN’s leading international affairs programme GPS.

ZAKARIA: Events like the attacks in Paris make the majority of us wonder why. And none of us can really understand what would push someone to do something so barbaric, so cowardly.

Well, my next guest has been studying religious extremism for years. And he wrote a recent book about it that is terrific. Rabbi Jonathan Sacks, the former Chief Rabbi of Britain, is the author of “Not in God’s Name: Confronting Religious Violence“, which is really an important book that I urge you to read and buy.

Rabbi Sacks, let me ask you the simple question that so many people ask. Is this about Islam?

JONATHAN SACKS, AUTHOR: Well, clearly, you know, if a terrorist is committing murder while shouting “Allahu Akbar, God is great,” This is a religious act. And as equally known doubt that ISIS is saturated in texts from the Koran and the Hadith, and a religious reading of history, that we are into tremendous moment of apocalypse. So, yes ISIS is a religious movement.

ZAKARIA: And how do you – what does one do about a movement that as you say, steeped in religion that proclaims itself as defining Islam when clearly, you know, it represents a very small minority. There is 1.6 billion Muslims in the world. How do you – how to think about that problem?

SACKS: Well, what I’ve tried to say in the book, is ISIS didn’t come out of nowhere. This radicalisation of Islam has taken many decades, the Muslim Brotherhood was born in 1928, (INAUDIBLE), inspiration for some of this was writing in the 1950s. Within the 1970s, the petro dollars were used in the Middle East to fund madrassas that put forward what until then had been a very minority form of Islam.

So, I think we have to think long and plan long. I’ve written this book really to encourage young Muslims to think differently about religion, especially in a global age. Reflect on the fact that Islam won its greatest admiration when it was most open, most tolerant as it was in al-Andalus in Spain and the 10TH to 12TH centuries. What I’m trying to do is say, let’s see if we can grow moderates within the great face to counter the extremists.

ZAKARIA: One of the things you stress in the book is that every religion has had these seeds of extremism and that it is through this kind of reform that you get rid of it. But you are cautious against the kind of blanket condemnations of Islam. You know, you try to use a very soft touch.

SACKS: Well, Islam is a great faith that’s had remarkably wonderful periods of history. In the early middle ages it was the epitome of tolerance. And then Spain, as I say, under the Umayyads, Jews, Christians and Muslims lived together in greater freedom than at any other times in the Middle Ages. Not liberal democracy by our standards, but at least an advance on anything until then. All I can say from Jewish and that matter, Christian history is that when religion turns violent, it begins by murdering its enemies, it ends by murdering its co-religionists. And it then inflicts a self-imposed injury on faith itself. The violence in Judaism internally in the first century caused the catastrophe that took his nearly 2000 years to get over. The violence between Christians, Catholics and Protestants in Europe in the 16 and 17 centuries, led to four centuries of secularisation. Religion begins when it chooses the part of violence by assaulting its enemies, but it becomes its own most serious victim.

ZAKARIA: And in a sense the pattern you’re describing is exactly what we’re seeing where these terrorist organisations began as exclusively anti-Western, but now it’s the Sunnis killing the Shia. How does one grow moderates? What is the – what is the path forward? You know, how should particularly westerners view this, you know, what is really an internal debate within Islam. How to help the good guys?

SACKS: Well, you know, what you try and do is try and create a situation, in which moderates see good practice in other faiths. See the arguments set out. That’s what I’ve tried to do. And that way you speak to people’s outerism. At the moment young Muslims are hearing only the radical extremist voices, the voices that shout loudest. But I know with my encounters with Muslims in Britain and the United States and indeed, many of them from the Middle East, that they are looking for another way, another voice. Something that will speak to the better angles of their nature. And in that way, we outside Islam, can do our best to help those within Islam to develop the courage to choose a different and better way.

ZAKARIA: Very briefly, Sacks, in 30 seconds, are you hopeful?

SACKS: I’m not an optimist, but no one with real faith can ever lose hope.