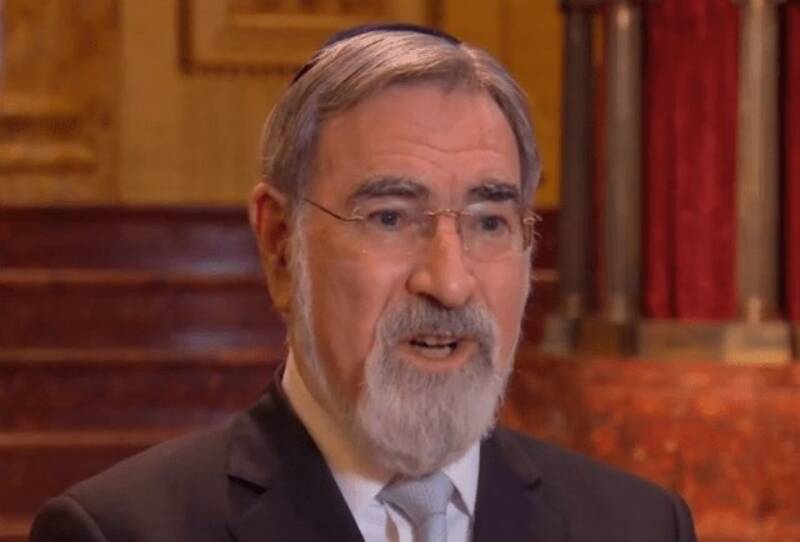 The first of two programme sees Rabbi Sacks talking about the threat posed by religious fundamentalism.

BOB ABERNETHY, host and correspondent: We have a profile now of the former Chief Rabbi of Great Britain, Jonathan Sacks. There is no one quite like him in the U.S. Sacks is a learned philosopher and Orthodox Rabbi, the author of 25 books, with 16 honorary degrees. He is a newspaper columnist and a popular broadcaster who was knighted by Queen Elizabeth. He is also a member of the House of Lords. All that, and a sense of humour. Rabbi Sacks is teaching and lecturing in the U.S. this year [at New York University and Yeshiva University.] He was the keynote speaker at the Jewish Federation’s annual General Assembly and then taught a class where he recalled his knighthood ceremony.

RABBI JONATHAN SACKS: When you receive a knighthood you have to kneel, and Jews don’t kneel. On Rosh Hashanah and Yom Kippur we do, but any other times? No. So they provide this little thing which you hold onto, this little rail so you can incline yourself a little without actually kneeling, at which point, I’m sure you know, the Queen turned to Philip and said, “Why is this knight different from all other knights!”

ABERNETHY: That’s knight with a “k.” As Britain’s Chief Rabbi for 22 years, Sacks got to know many of the world’s leaders. He was widely respected and honoured. And then he retired—to lead a global religious response to global religious violence.

RABBI SACKS: I am afraid that religion causes violence whenever we confuse piety and power. They are two completely different things. So when I seek power in the name of piety I do great harm. I injure God’s world. Fundamentalism, which is what we are talking about here, in any religion is always the product of fear, and I believe we have to allow faith to conquer fear. Somehow we have to let the better angels of our nature prevail over the fear that turns people into enemies. With religious movements it’s extremely hard to make peace, because peace demands a virtue called compromise, which to a religious mind is not a virtue but a vice.

ABERNETHY: And learning to respect each other’s religions—Jewish, Christian and Muslim—will take how long?

RABBI SACKS: I set myself up to kind of educate the educators of the next generation, and I don’t think there’s any shortcuts. There’s no quick fix here. You don’t suddenly turn radicals into moderates. You have to educate a generation.

ABERNETHY: That means we are looking at these atrocities for what, another generation or two?

RABBI SACKS: I suspect so.

ABERNETHY: Sacks insists that his message applies not only to Jews, but to others as well.

ABERNETHY: Sacks saw for himself the damage violent religious extremism can do when he visited ground zero in New York after 9/11.

ABERNETHY: Sacks’ hope that education can prevent violence is challenged by the Nazi Holocaust, which was supported by many of Europe’s most cultured and learned people.

RABBI SACKS: The more you study the Holocaust, the less you understand. I spent a lifetime studying it, and I still cannot understand. There were string quartets playing in Auschwitz-Birkenau while a million and a quarter human beings were gassed, burned, and turned to ash. What happened in Auschwitz in the Holocaust was a terrible demonstration of the limits of civilisation to civilise if we do not fear God and see His image in every human person.

ABERNETHY: Now the Internet and social media are spreading anti-Semitism.

RABBI SACKS: The end result is that hostility anywhere can be communicated everywhere. I would not say its people are suddenly starting to hate Jews. It’s just a few people have learned how you can communicate hate very effectively and very widely.

ABERNETHY: Is anything like that happening in the United States?

ABERNETHY: Sacks has deep praise for the ability of the U.S., over its history, to combine religion and freedom.

RABBI SACKS: If you want proof that you can be deeply religious and yet create a society that respects the freedom of the other, then you have to look here in America.

ABERNETHY: Sacks calls this a historic moment—challenging religious leaders to prevent the violent misuse of their own and everyone else’s faith.

RABBI SACKS: I think when the world, in Middle East, parts of Africa, parts of Asia are tearing themselves apart, of people fighting, wars of religion of the kind we have not seen since the 17th century, to get up and say to be a Jew is to be true to your faith and at the same time a blessing to others regardless of their faith. If people took that one sentence to heart it would change the world.

ABERNETHY: Which is just what Rabbi Sacks, in so-called “retirement,” is trying to do.

The second focuses on the relationship between religion and science.

BOB ABERNETHY: Now, more of my interview with the renowned retired Chief Rabbi of Great Britain, Jonathan Sacks, who is teaching and lecturing in the U.S. this year. Last week the Rabbi spoke here about religion and violence. Today, we begin with religion and science.

RABBI JONATHAN SACKS: Religion and science are two quite different things and we need them both. Science takes things apart to see how they work. Religion puts things together to see what they mean. And the pursuit of explanation — how do things work — and the pursuit of meaning — why am I doing this, why am I here — those are two really fundamental areas of human intelligence and they’re just different. You couldn’t really have religion without science, or we would be servants of nature instead of what God wants us to be — masters of it, responsible masters of it. But we couldn’t really have science without religion or we would discover that we live in a completely meaningless universe and then, you know, things would be very scientific but we would lose our very humanity.

[Speaking to Congregation] God can only forgive us if we forgive one another.

BOB ABERNETHY: Sacks believes that religion not only gives life meaning but that it is essential for civilisation. He described a religionless life.

RABBI SACKS: I think we can say what a life without religion in the 21st century would look like. It would say that you and I are no more than a collection of chemicals, a whole lot of selfish genes blindly reproducing themselves into the next generation. There is nothing whatsoever that distinguishes us qualitatively from the animal kingdom or any other life form. All ideals are illusions, all hopes are destined to be destroyed and life has no meaning whatsoever.

ABERNETHY: Sacks finds in Charles Darwin’s theory of evolution not so much opposition to religion but support for it.

RABBI SACKS: Darwin came up with one of the most profoundly religious insights of all, because Darwinian evolution tells us that the Creator made creation creative. We now know, having decoded the genomes of everything, all the way up to humans, that all life has a single source from the most primitive bacterium to us. Evolution is actually a profoundly religious insight.

ABERNETHY: Sacks is a philosopher as well as a Rabbi. He says neither reason nor science can prove God’s existence.

RABBI SACKS: We had a wonderful Jewish atheist, a brilliant man who was a professor of philosophy here in New York at Columbia University called Sidney Morgenbesser. And towards the end of his life when he was suffering quite a lot, [he] said to a fellow philosopher, “I don’t understand why God is so angry with me just because I don’t believe in Him.

ABERNETHY: Sacks says the greatest obstacle to belief in God is the reality of pain and evil. How could a loving god permit so much suffering?

RABBI SACKS: I don’t explain evil. I feel the problem. I actually say, though this sounds very paradoxical, that faith is in the question, not the answer. If you look at the Hebrew Bible the people who raise this question are not skeptics or atheists, they are the heroes of faith. Abraham in Genesis 18 says, “Shall the judge of all the earth not do justice?” Moses in Exodus Chapter 5 says, “God why have you made your people suffer?”

ABERNETHY: Sacks is very proud of the Jewish emphasis not only on study and tradition but on actions — being partners with God to repair the world.

RABBI SACKS: Judaism tends to be a religion of deeds and making the world better, what we call Tikkun Olam. So we really don’t have a problem with atheists or agnostics so long as they are willing to work along with us to make the world a slightly different place. We don’t ask that everyone who comes inside this synagogue believes in all elements of Jewish faith. We just say come and be part of the community, because it is in community that we find meaning, that we find relationship, that we find friendship and love, and it is in community that we change the world.

ABERNETHY: For Sacks, perhaps the greatest argument for religion may be the courage and hope of the people he helps lead.

RABBI SACKS: The most important distinction to make is between two ideas that sound similar and are in fact completely different. One is called optimism. The other is called hope. Optimism is the belief that things are going to get better. Hope is the belief that if we work hard enough, and together, we can help make things better. But it takes a great deal of courage to have hope. No Jew knowing our history can be an optimist, but no Jew worthy of the name ever gave up hope. The story of the Jewish people is the story of the victory of hope over despair and of the spirit over every kind of physical power. We are the people who never gave up hope and I want to say to you, you needn’t be an optimist, but you must never give up hope, because together we can make a better world.