Address to the Millennium Peace Summit at the United Nations 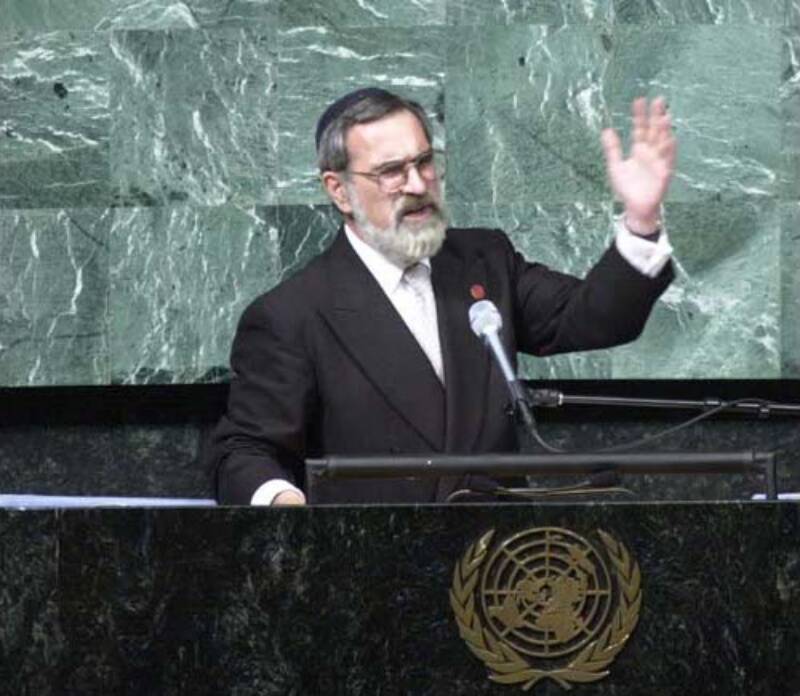 This is a transcript of the key address delivered by Chief Rabbi Jonathan Sacks during the Millennium Peace Summit at the United Nations on 28th August 2000.

And they were right. If I defeat you, I win, and you lose. But in truth, I also lose, because by diminishing you, I diminish myself. But if I forgive you, and if, in that moment of truth, you forgive me, then forgiveness leads to reconciliation; reconciliation leads to friendship; and in friendship, instead of fighting one another, we can fight together the problems we share – poverty, hunger, starvation, disease, violence, injustice, and all the other injuries that still scar the face of our world. You gain, I gain, and all those with whom we are associated gain as well. We gain economically, politically, but above all spiritually. My world has become bigger because it now includes you. Who is a hero? One who turns an enemy into a friend.

So simple, and yet so hard. This time last year, I stood in the streets of Pristina, in Kosovo, amidst the wreckage of war. The NATO operation had just come to an end. The Kosovo Albanians had returned home. But, in the air, there was an atmosphere of bitterness and anger. Months earlier, the Albanians were in terror of the Serbs. Now the Serbs feared reprisals from the Albanians. There was peace, but not real peace. War had ended, but reconciliation had not begun. Most of the soldiers with whom I spoke feared for the future. They thought that some day – perhaps not tomorrow, not next year, but some day – the conflict would begin again, as it has so often in that part of the world.

And then I knew, standing there surrounded by broken buildings and broken lives, that one word has the power to change the world. The word forgiveness. If we can forgive others, and act so that others can forgive us, then we can live with the past without being held as a prisoner by the past. But only if we forgive. Without that we condemn ourselves and our children to fight old battles again and again, with the same bloodshed, the same destruction, the same waste of the human spirit, the same devastation of God’s world.

It takes courage to forgive – because forgiving means letting go: letting go of the pain, letting go even of our sense of justice, our feeling that we or our people have been wronged. In war, even ordinary people become heroes. But in pursuit of peace, even heroes are often afraid to take the risk. I think of the exceptions. I think of the late Anwar Sadat of Egypt, and of the late Yitzhak Rabin of Israel. Both had the courage to make peace, and both were assassinated. Why is reconciliation so hard?

Let me answer personally. I am a Jew. And as a Jew, I carry with me the tears and sufferings of my grandparents, and theirs, through the generations. The story of my people is the story of a thousand years of exiles and expulsions, persecutions and pogroms, beginning with the First Crusade and culminating in the murder of two-thirds of Europe’s Jews. For centuries, Jews knew that they, or their children, risked being murdered simply because they were Jews. How can I let go of that pain when it is written into my very soul?

And yet I must. For the sake of my children I must. Will I bring one victim of the Holocaust back to life by hating Germans? Will I bring my people one step nearer freedom by denying that same freedom to others? Does loving God more, entitle me to love other people less? If I ask God to forgive me, does He not ask me to forgive others? The duty I owe my ancestors who died because of their faith is to build a world in which people no longer die because of their faith. I honour the past by learning from it, by refusing to add pain to pain, grief to grief. That is why we must answer hatred with love, violence with peace, and conflict with reconciliation.

Today God has given us no choice. There was a time when we could live surrounded by people who were like us. We could afford to say, ‘We are right. The rest of the world is wrong.’ We can’t do that any more. In every city, every street, we live among people who are not like us. Our lives, our safety, our environment, our very future, is bound up with countries far away, and cultures unlike our own. God has brought us eyeball to eyeball with the diversity of His world – and right now He is asking us: Can we recognise God’s image in someone who is not in my image? Can strangers, even enemies, become friends?

Never have the stakes been higher. Never have we had more power to heal or to wreck the world. Which will it be? Today I can communicate instantly across the world. But can I communicate with the Muslim, or Hindu or Sikh who lives in my street? We have conquered every distance except one – the distance between human beings. It won’t be technology that decides the future of our planet, but us, you and I and the people we lead. And that is where we, as religious leaders, bear a unique responsibility.

Look at the conflict zones in today’s world, and you will see that they coincide almost exactly with regions of religious tension. The question is: is religion part of the solution, or is it part of the problem? Let none of us doubt the difference we can make. Politicians have power, but religion has something greater than power. It has influence. Politics moves the pieces, but religion changes lives. Politicians sign peace agreements, but it our people, out there, on the ground, who will determine whether peace is real, or just a breathing space between wars. Religion is fire. And fire gives warmth and light, but it also burns. And we are the guardians of the flame.

It took the death of six million people to bring Jews and Christians together in mutual dignity and respect. How many more people will have to die in the Middle East, Kashmir, Northern Ireland, the Balkans, before we understand that God has given us many faiths but only one world in which to live together. I call on the leaders of the great faiths unequivocally to dissociate themselves from violence even when, especially when, it is done in the name of God. I believe the time has come to for the United Nations to invite the religious leaders of the world to form a global peace coalition, ready to travel to any conflict zone in the world, armed with the only thing more powerful than weapons of destruction, namely, words of forgiveness and reconciliation.

We have suffered, and inflicted suffering, for too long. The time has come for us to turn enemies into friends.