Jewry’s Journey to a Second Shavuot 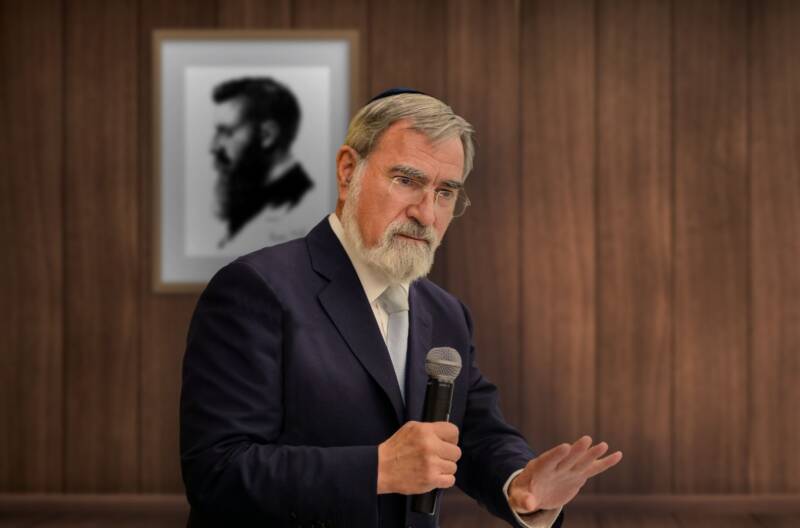 In June 1997 – 100 years after the First Zionist Congress – the Jewish Chronicle published an article written by Chief Rabbi Jonathan Sacks about a new kind of Zionism which hinged on the question of Jewish identity and the sense of belonging.

Sometimes, the most contemporary debates in Judaism are also the most ancient. That is certainly true of the most fundamental of all – the question of Jewish identity. What is it to be a Jew? Today, that debate reverberates throughout the Jewish world. Is being a Jew simply living in a Jewish state, or in the diaspora, being part of an ethnic group? Is it a matter of belonging rather than of believing? Or is Jewish identity something essentially religious, a faith and a way of life?

The most interesting of all answers is given by the Torah. At a certain point, Jews ceased to be a family – the children of Jacob – and became a nation. When did this take place, and how? To this, the Torah gives two different accounts. They could be called the Pesach and Shavuot definitions of Jewish identity.

On Pesach, at the Seder table, we expound the following passage:

“A wandering Aramean was my father, and he went down into Egypt, and sojourned there, few in number. And there, he became a nation…”

On Shavuot, we recall a quite different text. At Mount Sinai, prior to receiving the Ten Commandments, the Israelites heard these words from God:

“Now, if you obey Me fully and keep My covenant, then out of all the nations you will be My treasured possession, for all the earth is Mine. You will be for Me a kingdom of priests and a holy nation.”

There are two ways in which individuals come together to become a nation. The first is when they face a common enemy; that is what happened to the Israelites in Egypt. They were different. They were enslaved. Their suffering forged them as a group. They shared a collective fate. In Hebrew, we call such an entity an am, a people. At Sinai, Jews became a nation in a quite different sense. They became a body politic, with God as their Sovereign, and the Torah as their written constitution. They were brought together not by a common history of suffering but by a shared commitment to a unique way of life.

The Hebrew for such a group is edah, a congregation. An am is defined by what happened to it in the past. An edah is defined by what it is called on to do in the future. An am is a community of fate. An edah is a community of faith. The Torah does not suggest that Jewish identity is exclusively one or the other. To be a Jew is to be both part of an am and a member of an edah. More precisely, it is to journey from the first to the second.

Moses discovered his Jewish identity when he saw his brothers and sisters suffering in Egypt and knew his fate was joined to theirs. But he did not stop there, not even when he had led them out of slavery. He took them onward to Sinai, where they became the people of the Torah. That is the journey we retrace from Pesach to Shavuot. It is also our journey as modern Jews.

One hundred years ago, in the summer of 1897, a gathering took place in the small Swiss town of Basle that was to change the course of Jewish history. The first Zionist Congress, convened by Theodor Herzl, was an unlikely gathering. It brought together religious, non-religious, and even anti-religious Jews from across Europe. What united them was a common threat – antisemitism.

The term “antisemitism” was itself coined in 1879. Two years later, a series of pogroms broke out in Russia, followed by a spate of anti-Jewish legislation, the May Laws.

By 1894, the Dreyfus affair in France had convinced Herzl that even the assimilated Jews of Western Europe faced the same danger. The only answer lay in a second exodus, a new journey across the wilderness to the promised land. Herzl believed that, at Basle, he had laid the foundations of a new Jewish state and that it would be a reality within 50 years. He was out by only one year.

The 100 years between 1897 and today have been the century of the nightmare and the dream – the nightmare of the Holocaust, and the dream of Jewish sovereignty restored. We have seen the renaissance of the Hebrew language, the ingathering of exiles, the rebirth of the Jewish people as an independent nation in its own land, the rebuilding of Jerusalem.

But the Jewish journey does not end there. Pesach is the beginning of a process, not the end. The destination is Shavuot.

The Zionist movement and the State of Israel have revitalised Jewry as an am, a people of shared fate. For the past century, most Jews throughout the world have been united by a sense of kinship in the face of antisemitism, the Holocaust, and the struggles and triumphs of Israel.

The young Jews today who participate in the March of the Living, witness the concentration camps, and go on from there to Israel, are tracing out the path of modern Jewish history as a journey from slavery to freedom. They are reliving the Pesach of our time.

But Jewry has not yet reconstituted itself as an edah, a people under the sovereignty of God, whose constitution is the Torah. We have not yet had a second Shavuot.

Despite this, there have been remarkable developments in the past 30 years. Three institutions have appeared which have no precedent in Jewish history. Today, there are hesder yeshivot, where Israeli soldiers devote half their time to Torah study. There are baal teshuvah yeshivot for young Jews returning to their heritage. And there are seminaries where, for the first time, women are studying Torah at the highest level. These represent a rare burst of spiritual creativity.

Throughout the diaspora, Torah study is flourishing in ways that would have astonished previous generations. In Britain, adult education programmes are over-subscribed. In the United States, communities that a generation ago were on the edge of eclipse, today boast yeshivot and kollelim, institutes of higher talmudic learning. In Australia, later this year, thousands of Jews will gather to celebrate the completion of daf yomi, the seven-year cycle of daily talmudic study.

A new Zionism is in the making, just as it was a century ago. But this time, it is focused not on Pesach but on Shavuot. It is about Jewish identity not as an am but as an edah.

“Zion” does not mean only “place.” It is also related to the Hebrew word for “signpost,” something that stands out from its surroundings and signals a direction. Zion thus became a metaphor for the Jewish people. They, too, were distinctive. They stood out from the surrounding culture. Their role was to serve as a moral and spiritual signpost at the crossroads of human civilisation.

The first Zionist Congress was held in Switzerland because virtually the entire German rabbinate refused to allow it to take place in Germany. Today, yet again, Jews seem more intent on fighting one another than on heeding the call of history. But we will survive, because deep within the hearts of many young Jews is the knowledge that we are more than a community of fate.

Jews are not the only people to have been persecuted. We are not the only people to have fought for freedom, to have sought independence, sovereignty, a land, and state of our own. These are part of the Jewish story. But they cannot account for the unique influence we have had on the civilisation of the Western world. Nor can they explain the tenacity and pride with which Jews passed on their identity to their children across four millennia.

We are ultimately the people of Torah. To be a Jew is to be part of a nation which defined its very identity in terms of serving God, translating revelation into society and the choreography of daily life.

That is the journey which our best young people are pioneering today – and more will join with every passing year. It will dominate the Jewish agenda for the coming century. The Jewish people awaits its second Shavuot.