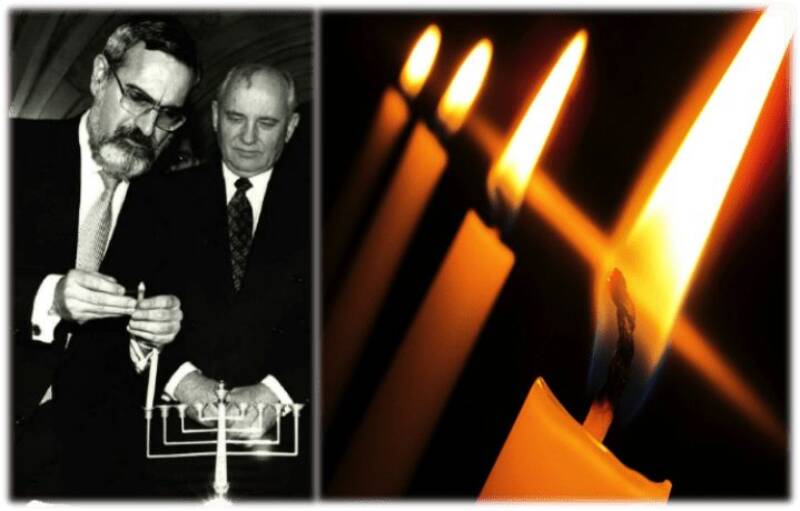 A Chanukah Message for the Fifth Night

CHANUKAH IN OUR TIME

Back in 1991, I lit Chanukah candles with Mikhail Gorbachev, who had, until earlier that year, been President of the Soviet Union.

For seventy years, the practice of Judaism had been effectively banned in communist Russia. It was one of the two great assaults on our people and our faith in the 20th century. The Germans sought to kill Jews; the Russians tried to kill Judaism.

Under Stalin the assault became brutal. In 1967, after Israel’s victory in the Six Day War, many Soviet Jews sought to leave Russia and go to Israel. Not only was permission refused, but often the Jews concerned lost their jobs and were imprisoned.

Around the world, Jews campaigned for the prisoners, Refuseniks they were called, to be released and permitted to leave the country.

Eventually Mikhail Gorbachev realised that the whole Soviet system was unworkable. Communism had brought repression, a police state, and a new hierarchy of power, not freedom and equality. In the end it collapsed, and Jews regained the freedom to practise Judaism and to go to Israel.

That day in 1991, after we had lit candles together, Mr Gorbachev asked me, through his interpreter, what we had just done. I told him that 22 centuries ago in Israel after the public practice of Judaism had been banned, Jews fought for and won their freedom, and these lights were the symbol of that victory. And I continued: “Seventy years ago, Jews suffered the same loss of freedom in Russia, and you have now helped them to regain it. So you have become part of the Chanukah story.”

And as the interpreter translated those words into Russian, Mikhail Gorbachev blushed. The Chanukah story still lives, still inspires, telling not just us but the world that though tyranny exists, freedom, with God’s help, will always win the final battle.

The symbol of Chanukah is the chanukiah we light for eight days in memory of the Temple Menorah, purified and rededicated by the Maccabees all those centuries ago. Faith is like a flame. Properly tended, it gives light and warmth, but let loose, it can burn and destroy. We need, in the 21st century, a global Chanukah: a festival of freedom for all the world’s faiths. For though my faith is not yours and your faith is not mine, if we are each free to light our own flame, together we can banish some of the darkness of the world.

Why Chanukah is the Perfect Festival for Religious Freedom, The Washington Post
(7th December 2015)

On Chanukah 1932, just one month before Hitler came to power, Rachel Posner, wife of Rabbi Dr. Akiva Posner, took this photo of the family chanukiah from the window-ledge of the family home looking out onto the building across the road decorated with Nazi flags.

On the back of the photograph, Rachel Posner wrote in German:

Rabbi Dr. Akiva Posner, Doctor of Philosophy from Halle-Wittenberg University, served from 1924–1933 as the last Rabbi of the community of Kiel, Germany. After he wrote a protest letter in the local newspaper expressing indignation at the posters that had appeared in the city: “Entrance to Jews Forbidden”, he was summoned by the chairman of the local branch of the Nazi party to participate in a public debate. The event took place under heavy police guard and was reported by the local press.

When the tension and violence in the city intensified, the Rabbi, his wife Rachel and their three children were forced to flee their home and make their way to Eretz Yisrael. Before their departure, Rabbi Posner was able to convince many of his congregants to leave as well and indeed most managed to leave for Eretz Yisrael or the United States. The Posner family left Germany in 1933 and arrived in Eretz Yisrael in 1934.

Some eighty years later, Akiva and Rachel Posner’s descendants continue to light Chanukah candles using the same chanukiah that was brought to Israel from Kiel. On Chanukah 5770 (2009), Akiva Mansbach, dressed in the uniform of the Israel Defence Forces, saluted and read out a poem he had written in Hebrew, inspired by the poem written by his great-grandmother Rachel Posner in 1932.

In 5692 the chanukiah is in exile, it stands in the window / It challenges the party flag that doesn’t yet rule / “Judah die!” it says / And Grandma’s rhyme responds / In its own tongue, without despair: So the flag says, but our candle answers and declares / “Judah will live forever”.

In 5770 the chanukiah stands in the window once again / Facing the flag of the ruling State / The descendant Akiva, named for his great-grandfather / Salutes through the window and lights the chanukiah / Grandmother, give thanks above and say a prayer / That “the Redeemer will come to Zion” and not delay.

Why do you think this photograph has brought so many people comfort?

Can you find eight differences between these two Chanukah pictures?

In December of 1993, Space Shuttle Endeavour was sent into space to service the Hubble Space Telescope. One of the astronauts to bravely perform a spacewalk to repair the telescope was Jeffrey Hoffman. Knowing that he would be stuck in space over Chanukah, Hoffman made sure to bring along a dreidel and a travel-sized chanukiah so that he’d be able to celebrate the chag (although, because of lack of gravity and safety concerns, there was no way to actually light candles). Then, via live satellite communication, he presented his Chanukah supplies, gave his dreidel a twirl in the air, and wished Jews everywhere a happy Chanukah.

CHANUKAH IN OUR TIME

The photo (and the poem written on the back), is a reminder that no matter how dark times get, and how much it looks like our survival is at risk, the Jewish people will always survive and persevere. Taking it one step further, we can also note that the uniform of the Israel Defence Forces worn by the great-grandson of the original owners of this chanukiah represent the modern-day Macabees and a strengthened faith that the Jewish people will survive.

Tonight’s book is The Dignity of Difference: How to Avoid the Clash of Civilizations, an ethical critique of the politics and economics of globalisation, threaded with a profound sense of history.