Not Reckoned Among the Nations
Family Edition 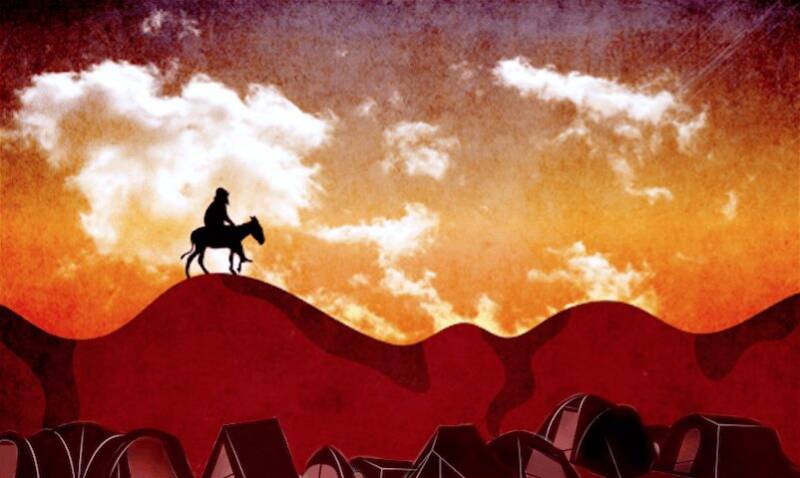 Balak, king of Moab, fears the approach of the Israelites. Together with the elders of Midian, he attempts to hire the well-known Mesopotamian prophet Bilam to curse the Jewish people. Bilam consults with God, who tells him not to go, but the Moabites and Midianites return with another offer. This time God instructs Bilam to accompany them but only to say the words He puts in his mouth. After a strange incident where Balaam’s donkey sees an angel blocking the way, Bilam and Balak climb a mountain overlooking the Israelites’ camp.

Three times at different places they prepare altars and sacrifices, but each time, Bilam utters blessings instead of curses. Balak leaves in anger and frustration.

Having been spared Bilam curses, however, the Israelites bring disaster on themselves through bad behaviour, adultery and idolatry. Twenty-four thousand people die in a plague that strikes the camp until Pinchas, in an act of zealotry and passion, rises up against one of the wrongdoers.

Some of the most beautiful things ever said about the Jewish people were said by Bilam. “Who can count the dust of Yaakov… How beautiful are your tents, Yaakov, your dwelling places, Israel!… A star will come out of Yaakov; a sceptre will rise out of Israel.”

One of these blessings is among the most famous descriptions ever given of the people Israel: “It is a nation dwelling alone, not reckoned among the nations.” (Bamidbar 23:9)? But what does this mean?

There is an explanation that has become popular in modern times, that it is Israel’s destiny to be isolated, friendless, hated, abandoned and alone, as if antisemitism were somehow written into the script of history. I do not believe this. It isn’t. None of the prophets said so. To the contrary, they believed that the nations of the world would eventually recognise Israel’s God and come to worship Him in the Temple in Jerusalem. Zechariah (8:23) foresees a day when “ten people from all languages and nations will take firm hold of one Jew by the hem of his robe and say, ‘Let us go with you, because we have heard that God is with you.’” There is nothing destined or inevitable about antisemitism.

What then do Bilam’s words mean? “It is a nation dwelling alone, not reckoned among the nations.” Ibn Ezra says they mean that unlike all other nations, even when we are a tiny group surrounded by many in a non-Jewish culture, Jews will not assimilate. Ramban says that it means our culture and faith will remain pure, not a mix of multiple traditions and nationalities. Netziv gives the interpretation which was a clear warning to the Jews of his time, that “If Jews live distinctive and apart from others they will dwell safely, but if they seek to emulate ‘the nations’ they ‘will not be reckoned’ as anything special at all.”

There is, however, another possibility, ironically hinted at by an antisemitic writer, G. K. Chesterton. He famously wrote that America was “a nation with the soul of a church” and “the only nation in the world founded on a creed (religious belief).” But in fact, America is not the only nation that can be described in this way. This is precisely what made Israel different – and when America was first formed, it was strongly influenced by the idea of biblical Israel and the Jewish concept of covenant. Ancient Israel was indeed founded on a creed, and was, as a result, a nation with the soul of a religion. When Bilam described the Jewish people as “not reckoned among the nations”, he was highlighting what made Israel unique. The Jewish people are unique in that they are both a nation and a religion.

1. Why is it tempting to interpret the words “A nation dwelling alone, not reckoned among the nations” to mean that Israel’s destiny to be isolated, friendless, and hated?

2. Do you think one day we will live in a world without antisemitism?

3. What makes a nation a nation? How is the Jewish nation unique?

It once happened on the battlefield between two warring nations, that Jew faced Jew in mortal combat. As one of the Jewish soldiers ran for cover into a foxhole, the other called out, “Surrender, or I’ll shoot.” The hiding soldier, quivering in fear, closed his eyes, and crying, recited the familiar words from his childhood: “Shema Yisrael, Hashem Elokeinu, Hashem Echad.” As the other soldier heard these words, he responded with surprise and emotion, “Baruch shem kevod malchuto le’olam va’ed.” As he laid down his gun he extended a hand to his former enemy, and they embraced as brothers.[1]

2. Can you belong to more than one nation? What is your national identity?

[1] This story has been told at different times in history, of different wars (including World War I and the Falklands conflict in 1982) and could theoretically have happened in any war between two armies that had Jewish soldiers fighting each other.

As we explored in the parsha of Beha’alotecha, nations both ancient and modern, have always arisen out of historical factors. A group of people live in a land, develop a shared culture, form a society, and thus become a nation.

Jews, certainly from the Babylonian exile onward, had none of the conventional attributes of a nation. They did not live in the same land. Some lived in Israel, others in Babylon, yet others in Egypt. Later they would be scattered throughout the world. They did not share a language of everyday speech, as they learned the language of the country where they lived. Rashi spoke French, Rambam spoke Arabic. There were many Jewish vernaculars, such as the versions of Yiddish, Ladino and other regional Jewish dialects. They did not live under the same political dispensation. They did not share the same cultural environment. And Jews in different countries experienced different golden ages and hard times.  Yet we always saw ourselves, and were seen by others, as one nation: the world’s first, and for long the world’s only, global people.

What then made them a nation? This was the question R. Saadia Gaon asked in the tenth century, to which he gave the famous answer: “Our nation is only a nation in virtue of its laws (torot).” They were the people defined by the Torah, a nation under the sovereignty of God. Having received, uniquely, their laws before they even entered their land, they remained bound by those selfsame laws even when they lost the land. Of no other nation has this ever been true.

Uniquely then, in Judaism religion and nationhood coincide. There are nations with many religions: multicultural Britain is one among many. There are religions governing many nations: Christianity and Islam are obvious examples. Only in the case of Judaism is there a one-to-one correlation between religion and nationhood. Without Judaism there would be nothing (except antisemitism) to connect Jews across the world. And without the Jewish nation Judaism would cease to be what it has always been, the faith of a people bound by a bond of collective responsibility to one another and to God. Bilam was right. The Jewish people really are unique. Nothing therefore could be more mistaken than to define Jewishness as a mere ethnicity. If ethnicity is a form of culture, then Jews are not one ethnicity but many. In Israel, Jews are a walking lexicon of almost every ethnicity under the sun. If ethnicity is another word for race, then conversion to Judaism would be impossible (you cannot convert to become Caucasian; you cannot change your race at will).

What makes Jews “a nation dwelling alone, not reckoned among the nations,” is that their nationhood is not a matter of geography, politics or ethnicity. It is a matter of religious vocation as God’s covenant partners, summoned to be a living example of a nation among the nations made distinctive by its faith and way of life. Lose that and we lose the one thing that was and remains the source of our singular contribution to the heritage of humankind. When we forget this, sadly, God arranges for people like Bilam and Chesterton to remind us otherwise. We should not need such reminding.

Uniquely, Jews are born into a faith. It chooses us before we choose it. Physically we come into this world without any possessions, but spiritually we each come with a gift: the story of our past, of our parents and theirs, through almost forty centuries from the day Avraham and Sarah first heard the call of God and began their journey to a land, a promise, a destiny and a vocation. That story is ours.

It is a strange and moving story. It tells of how a family, then a collection of tribes, then a nation, were summoned to be God’s ambassadors on earth. They were charged with building a society unlike any other, based not on wealth and power but on justice and compassion, the dignity of the individual and the sanctity of human life – a society that would honour the world as God’s work and the human person as God’s image.

That was and is a demanding task, yet Judaism remains a realistic religion. It assumed from the outset that transforming the world would take many generations – hence the importance of handing on our ideals to the next generation. It takes many gifts, many different kinds of talent – hence the importance of Jews as a people. None of us has all the gifts, but each of us has some. We all count; we each have a unique contribution to make. We come before God as a people, each giving something, and each lifted by the contributions of others.

And yes, at times we fail or fall short – hence the importance of teshuvah, repentance, apology, forgiveness, re-dedication. Judaism is bigger than any of us, yet it is made by all of us. And though Jews were and are a tiny people, today a mere fifth of a per cent of the population of the world, we have made a contribution to civilisation out of all proportion to our numbers.

To be a Jew is to continue the journey our ancestors began, to build a world that honours the image of God in every human being and to be part of a people summoned by God to be His ambassadors down here on earth.

1. What makes the Jewish people a nation?

2. What makes the Jewish people a religion?