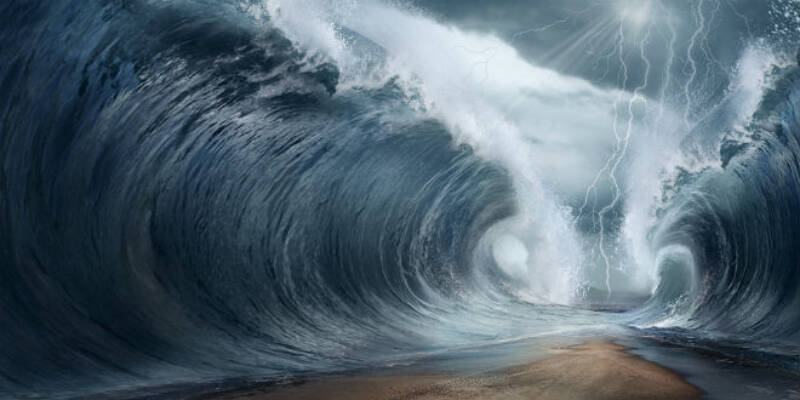 The Israelites leave Egypt. God deliberately leads them on a circuitous route. They come up against the Reed Sea. Pharaoh, having changed his mind about letting them go, pursues them with horses and chariots. The people come close to despair. Then, in one of the supreme miracles of history, the sea divides. The Israelites pass through and sing a momentous song of faith and deliverance. But their troubles are not over. They lack drinkable water, and food. God sends both: oasis springs and then water from a rock, and manna from heaven. The parsha ends as it began, with the prospect of war, this time against the Amalekites.

The splitting of the Reed Sea is engraved in Jewish memory. We say it twice every day during the morning service. It was the ultimate miracle of the Exodus. But in what sense? If we listen carefully to the way the Torah describes it, we can distinguish two ways of looking at it.

However, if we listen carefully, we can also hear a different note: “Then Moses stretched out his hand over the sea, and all that night the Lord drove the sea back with a strong east wind and turned it into dry land. (Exodus 14:21) Here there is not a sudden change in the behaviour of water, with no apparent cause. God brings a wind that, in the course of several hours, drives the waters back.

Viewed from this perspective, the events that took place could be described as follows: The Israelites had arrived at the Reed Sea at a point at which it was shallow. Possibly there was a ridge in the sea bed, normally covered by water, but occasionally – when, for example, a fierce east wind blows – exposed.

We have here two ways of seeing the same events: one natural, the other supernatural. The supernatural explanation – that the waters stood upright – is immensely powerful, and so it entered Jewish memory. But the natural explanation is no less compelling. To put it another way: a miracle is not necessarily something that suspends natural law. It is, rather, an event for which there may be a natural explanation, but which – happening when, where and how it did – evokes wonder, such that even the most hardened sceptic senses that God has intervened in history. The weak are saved; those in danger, delivered.

2. If the splitting of the Reed Sea was caused by a fierce east wind, does this make it any less miraculous?

3. In our age, where there are no perceptible supernatural miracles, do you still believe God intervenes in history and acts through nature? Can you give any examples?

During Israel’s War of Independence in 1948 a famous miracle occurred in the Arizal’s synagogue in the holy city of Tzefat. The synagogue was full of people while the battle for the city was going on around them outside. During the tefillah, a bomb exploded just outside the synagogue, spraying debris everywhere, including into the synagogue. Miraculously, just as the worshipers by the bimah bowed their heads for the blessing of Modim, a piece of metal flew directly above their heads, and lodged itself in the bimah. Bowing their heads saved their lives. The hole it made can still be seen today, reminding visitors of this miracle, and the need to thank God.

1. This story describes this event as a miracle. Do you agree that it was miraculous? What aspect of it was a miracle?

2. Can you think of any other stories from Israel’s history that you would consider a miracle?

There is an extra dimension to the second perspective to the splitting of the Reed Sea. “During the last watch of the night the Lord looked down from the pillar of fire and cloud at the Egyptian army and threw it into confusion. He made the wheels of their chariots come off so that they had difficulty driving. The Egyptians said, “Let’s get away from the Israelites! The Lord is fighting for them against Egypt.” (Exodus14:24-25). The emphasis here is less on miracle than on irony. The great military assets of the Egyptians – making them almost invulnerable in their day – were their horses and chariots. These were Egypt’s specialty.

In our second reading of these events, the wind that exposed the ridge in the bed of the sea led to dramatic events. Suddenly the Israelites, travelling on foot, had an immense advantage over the Egyptian chariots that were pursuing them. Their wheels became stuck in the mud. The charioteers made ferocious efforts to free them, only to find that they quickly became mired again. The Egyptian army could neither advance nor retreat. So intent were they on the trapped wheels, and so reluctant were they to abandon their prized war machines, the chariots, that they failed to notice that the wind had dropped and the water was returning. By the time they realised what was happening, they were trapped. The ridge was now covered with sea water in either direction, and the island of dry land in the middle was shrinking by the minute. The mightiest army of the ancient world was defeated, and its warriors drowned, not by a superior army, not by human opposition at all, but by their own folly in being so focused on capturing the Israelites that they ignored the fact that they were driving into mud where their chariots could not go.

The Egyptians’ strength proved to be their weakness. The weakness of the Israelites became their strength. On this reading, what was significant was less the supernatural, than the moral dimension of what happened. God visits the sins on the sinners. He mocks those who mock Him. He showed the Egyptian army, which revelled in its might, that the weak were stronger than they. More significant than the miraculous or natural nature of these events, is the moral message such an event conveys: that hubris is punished by nemesis; that the proud are humbled and the humble given pride; that there is justice in history, often hidden but sometimes gloriously revealed.

This idea can be taken further. Emil Fackenheim has spoken of “epoch-making events” that transform the course of history. It is as if all normal perception fades away and we know that we are in the presence of something momentous, to which we sense we must remain faithful for the rest of our lives. It is through transformative events that we feel ourselves addressed, summoned, by something beyond history, breaking through into history. In this sense, the division of the Reed Sea was something other and deeper than a suspension of the laws of nature. It was the transformative moment at which the people “believed in the Lord and in Moses His servant” (14:31) and called themselves “the people You acquired” (15:16).

The genius of the biblical narrative of the crossing of the Reed Sea is that it does not resolve the issue one way or another. It gives us both perspectives. To some, the miracle was the suspension of the laws of nature. To others, the fact that there was a naturalistic explanation did not make the event any less miraculous. That the Israelites should arrive at the sea precisely where the waters were unexpectedly shallow, that a strong east wind should blow when and how it did, and that the Egyptians’ greatest military asset should have proved their undoing – all these things were wonders, and we have never forgotten them.

The creation of the State of Israel was fraught with difficulty. Yes it has achieved wondrous things.

Through it, Hebrew, the language of the Bible, was reborn as a living tongue. Jewish communities under threat have been rescued, including those like the Jews of Ethiopia who had little contact with other Jews for centuries. Jews have come to Israel from over a hundred countries, representing the entire lexicon of cultural diversity. A desolate landscape has bloomed again. Jerusalem has been rebuilt. The world of Torah scholarship, devastated by the Holocaust, has been revived and the sound of learning echoes throughout the land. Economically, politically, socially and culturally, Israel’s achievements are unmatched by any country of its age and size. The Sages said that, at the crossing of the Reed Sea, the simplest Jew saw miracles that the greatest of later prophets were not destined to see. That, surely, was the privilege of those who witnessed Israel’s rebirth and youth. The messiah has not come. Israel is not yet at peace. The Beit Hamikdash has not been rebuilt. Our time is not yet redemption. Yet many, if not all, of the prayers of two thousand years have been answered…

The Jonathan Sacks Haggadah, from the essay, “Pesach and the Rebirth of Israel”

1. Do you think the history of the State of Israel is miraculous?

2. Do you find modern Jewish history strengthens or challenges your faith in God?

From the Thought of Rabbis Sacks