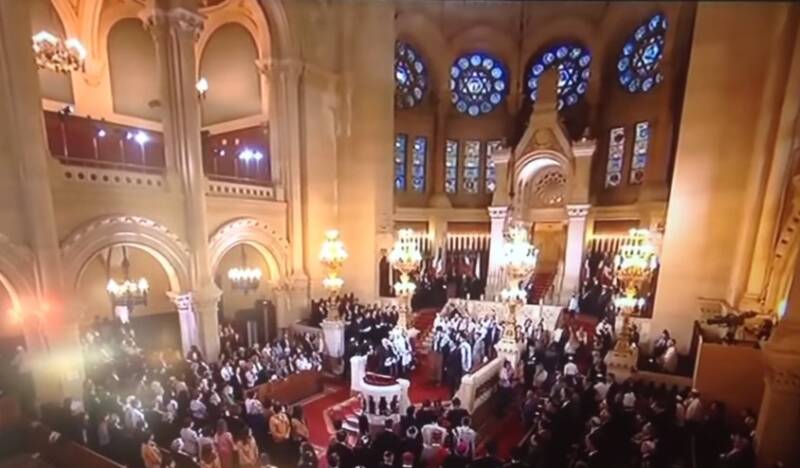 With Terumah begins the longest single passage in the Book of Exodus, continuing to the end of the book and interrupted only by the episode of the Golden Calf. Its subject is the Mishkan, the Tabernacle or Sanctuary the Israelites were commanded to make as a centre of worship and as a visible sign of the presence of God in their midst. The length and detail of the description of the building of the Tabernacle send the message of its central significance to the Israelites, but at the same time this long passage at times require great effort to understand, interpret and translate into the language and thought of today.

The parsha of Terumah describes the construction of the Tabernacle, the first collective house of worship in the history of Israel. The first but not the last; it was eventually succeeded by the Temple in Jerusalem. It is hard to understand the depth of the crisis experienced after the destruction of the First Temple. The very existence of Jewish people was based on a relationship with God symbolised by the worship that took place daily in Jerusalem. With the Babylonian conquest in 586 BCE, Jews lost not only their land and sovereignty. In losing the Temple, it was as if they had lost hope itself. For their hope lay in God, and how could they turn to God if the very place where they served Him was in ruins?

It was then that an answer began to take shape. The Temple no longer stood, but its memory remained, and this memory was strong enough to bring Jews together in collective worship. In exile, in Babylon, Jews began to gather teach Torah, talk about a collective hope of return, and remember the Temple and its service.

The prophet Ezekiel was one of those who shaped a vision of return and restoration, and it is to him we owe the first indirect reference to a radically new institution that eventually became known as the Beit Knesset, the synagogue: “This is what the sovereign Lord says: although I sent them far away among the nations and scattered them among the countries, yet I have become to them a small Sanctuary [Mikdash me’at] in the countries where they have gone” (Ezekiel 11:16). The central Sanctuary had been destroyed, but a small echo, a miniature, remained.

The synagogue is one of the most remarkable examples of an itaruta de’letata, “an awakening from below.” It came into being not through words spoken by God to Israel, but by words spoken by Israel to God. There is no synagogue in Tanach, no command to build local houses of prayer. On the contrary, insofar as the Torah speaks of a “house of God” it refers to a central Sanctuary, a collective focus for the worship of the people as a whole.

We tend to forget how profound the concept of a synagogue was. Professor M. Stern has written that “in establishing the synagogue, Judaism created one of the greatest revolutions in the history of religion and society, for the synagogue was an entirely new environment for divine service, of a type unknown anywhere before.” It became, according to the historian Salo Baron, the institution through which the diaspora community “completely shifted the emphasis from the place of worship, the Sanctuary, to the gathering of worshippers, the congregation, assembled at any time and any place in God’s wide world.” The synagogue became Jerusalem in exile, the home of the Jewish heart. It is the ultimate expression of monotheism – that wherever we gather to turn our hearts towards heaven, there the Divine Presence can be found, for God is everywhere.

1. What is the difference between the Temple in Jerusalem and your Beit Knesset?

2. Why was the creation of the synagogue as a model of worship a “revolution”?

3. Would you say that your synagogue is the central point around which your Jewish life revolves? If so, give examples.

On 14 October 1663 the famous diarist Samuel Pepys paid a visit to the Spanish and Portuguese Synagogue in Creechurch Lane in the city of London. Jews had been exiled from England in 1290 but in 1656, following an intervention by Rabbi Menasseh ben Israel of Amsterdam, Oliver Cromwell concluded that there was in fact no legal barrier to Jews living there. So, for the first time since the thirteenth century, Jews were able to worship openly.

The synagogue Pepys visited was simply a private house belonging to a successful Portuguese Jewish merchant, Antonio Fernandez Carvajal, that had been extended to house the congregation. Pepys had been in the synagogue once before, at the memorial service for Carvajal who died in 1659. That occasion the atmosphere was somber and respectful. What he saw on his second visit was something else altogether, a scene of celebration that left him outraged. This is what he wrote in his diary:

… after dinner my wife and I, by Mr. Rawlinson’s conduct, to the Jewish Synagogue: where the men and boys in their vayles [tallitot], and the women behind a lattice out of sight; and some things stand up, which I believe is their Law [Sefer Torah], in a press [the ark] to which all coming in do bow; and at the putting on their vayles do say something, to which others that hear him do cry Amen, and the party do kiss his vayle. Their service all in a singing way, and in Hebrew. And anon their Laws that they take out of the press are carried by several men, four or five several burthens in all, and they do relieve one another; and whether it is that everyone desires to have the carrying of it, I cannot tell, thus they carried it round about the room while such a service is singing … But, Lord! to see the disorder, laughing, sporting, and no attention, but confusion in all their service, more like brutes than people knowing the true God, would make a man forswear ever seeing them more and indeed I never did see so much, or could have imagined there had been any religion in the whole world so absurdly performed as this.

Poor Pepys. No one told him that the day he chose to come to the synagogue was Simchat Torah, nor had he ever seen in a house of worship anything like the energetic joy of the day when we dance with the Torah scroll as if the world was a wedding and the book a bride, with the same abandon as King David when he brought the holy ark into Jerusalem.

1. Do you think the Beit Knesset (shul) should be solemn and magnificent or intimate and lively? Which of these descriptions is most like your synagogue?

Where did this world-changing idea, of the Synagogue as the portable home for God wherever we find ourselves, come from? It did not come from the Temple, but rather from the much earlier institution described in this week’s parsha: the Tabernacle. Its essence was that it was portable, made up of beams and hangings that could be dismantled and carried by the Levites as the Israelites journeyed through the wilderness. The Tabernacle, a temporary structure, turned out to have permanent influence, whereas the Temple, intended to be permanent, proved to be temporary – until, as we pray daily, it is rebuilt.

More significant than the physical structure of the Tabernacle was its metaphysical structure. The very idea that one can build a home for God seems absurd. The very concept of making a home in finite space for an infinite presence seems a contradiction in terms.

The answer, still astonishing in its profundity, is contained at the beginning of this week’s parsha: “They shall make a Sanctuary for Me, and I will dwell in them [betokham]” (Exodus 25:8). The Jewish mystics pointed out the linguistic strangeness of this sentence. It should have said, “I will dwell in it,” not “I will dwell in them.” The answer is that the Divine Presence lives not in a building but in its builders; not in a physical place but in the human heart. The Sanctuary was not a place in which the objective existence of God was somehow more concentrated than elsewhere. Rather, it was a place whose holiness had the effect of opening hearts to the One worshipped there. God exists everywhere, but not everywhere do we feel the presence of God in the same way. The essence of “the holy” is that it is a place where we set aside all human devices and desires and enter a domain wholly set aside for God.

If the concept of the Mishkan, the Tabernacle, is that God lives in the human heart whenever it opens itself unreservedly to heaven, then its physical location is irrelevant. Thus the way was open, seven centuries later, to the synagogue: the supreme statement of the idea that if God is everywhere, He can be reached anywhere. I find it moving that the frail structure described in this week’s parsha became the inspiration of an institution that, more than any other, kept the Jewish people alive through almost two thousand years of dispersion – the longest of all journeys through the wilderness.

The Jewish contribution to civilisation did not lie in architecture. There were exceptions. But at most times, Jews built relatively modest places of worship, and one is led to wonder why. Was it that often they were simply poor and few in number? Or that neither Christians nor Muslims allowed them to build houses of worship that might rival their own? Was it simply that experience had taught them that, during the long night of exile, no place of residence was secure? Had they been expelled too often from too many countries to seek permanence in stone? There is a measure of truth in each of these suggestions, but I cannot help feeling that the larger truth lies elsewhere.

After the destruction of the Second Temple Jews lived by an ancient and fundamental insight, that God does not live in buildings but in the human heart. When He commanded the Israelites to construct the Tabernacle, He said, ‘They shall make Me a Sanctuary that I may dwell in their midst’ (Exodus 25:8) – in their midst, not in its midst. The Shechinah, God’s indwelling presence, was in a people not a place. The traces of His spirit are to be found in human lives. What in other faiths was achieved through architecture – visible symbols of the order and majesty of creation – was achieved in Judaism through the life of the holy community, constructed according to the plans of the Torah. The rabbis carved, polished and engraved its teachings as if they were stones of a great edifice, and so they were, but it was a living one built out of words and deeds. A Jewish legend says when the Temple was destroyed splinters from its stones entered the hearts of the Jewish people. When they gathered as Knesset Yisrael, the congregation of Israel united across space and time in the collective service of God, they became a kind of human Temple and in their lives the Divine Presence found its earthly home. So, when they were not trying to imitate their neighbours, Jews rarely put their energies into buildings. They put them into study and worship and acts of social welfare. They constructed synagogues, but what they built was communities of faith.

1. If God “does not live in buildings but in the human heart” then why build a Tabernacle, Temple or synagogue?

2. What is the difference between constructing a synagogue and building a community of faith?