The God Who Acts in History
Family Edition 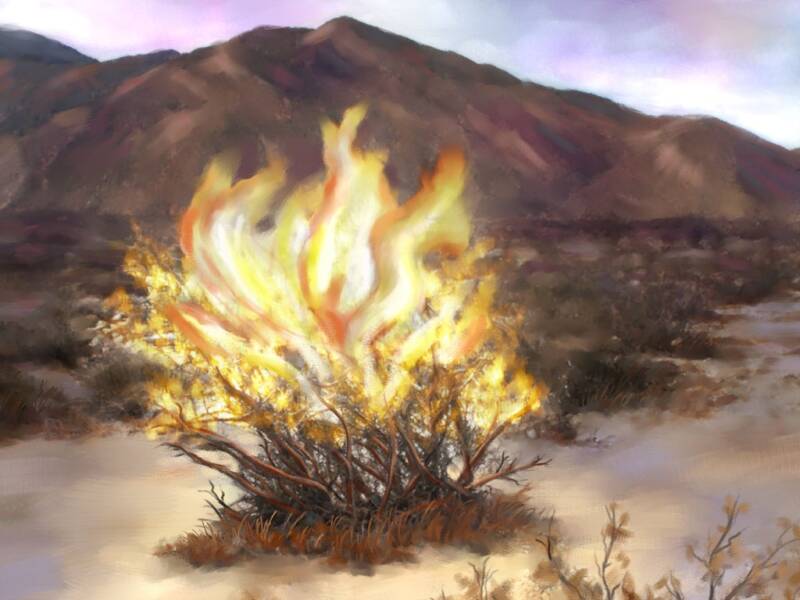 In Va’era, the story of the exodus begins in earnest, with an unprecedented series of divine interventions into history. Time and again plagues hit the Egyptians. Moshe repeatedly asks Pharaoh to release the people. Repeatedly, Pharaoh refuses. An immense drama is taking place. All the power of imperial Egypt is powerless against the God of creation and redemption.

We are at the lowest point in Israelite history so far. They have been enslaved. Pharaoh has decreed that every Jewish male child is to be killed. Moshe is sent to liberate them, but the first effect of his intervention is to make matters worse, not better. Now they have to provide their own straw, and still make the same number of bricks as before. At first they believed Moshe when he performed the various signs God had given him, and told them that God was about to rescue them, but now they turn on him and his leadership.

None of this, however, has been accidental. The Torah is preparing the ground for one of its most epic assertions: It is in the darkest night that Israel has its greatest visions. Hope is born in the depth of despair. There is nothing natural about this, nothing inevitable. No logic can give rise to hope; no law of history charts a path from slavery to redemption, exile to return. The entire sequence of events has been a run-up to the single most formative moment in the history of Israel: the intervention of God in history – the supreme Power intervening on behalf of the supremely powerless, not (as in every other culture) to endorse the status quo, but to overturn it.

This is a world-changing idea. What is revolutionary in Judaism is not simply the concept of monotheism – that the universe is not a blind clash of conflicting powers but the result of a single creative will. It is that God is involved in His creation. God is not simply the force that brought the universe into being, nor is He reached only in an individual’s private soul. At a certain point He intervened in history, to rescue His people from slavery and set them on the path to freedom.

1. Why do you think Jewish history had to start at such a low point?

2. Judaism believes that God acts in history (as seen so clearly in the Exodus story). What are the alternative ways to look at God and history?

Several years after the destruction of the Holy Temple, Rabban Gamliel, Rabbi Eliezer ben Azarya, Rabbi Yehoshua, and Rabbi Akiva were going up to Jerusalem. When they reached Mount Scopus, the site of the Temple came into view, and they tore their garments in mourning. When they reached the Temple Mount, they saw a fox dart out from the spot where the Holy of Holies had stood in the Holy Temple. The rabbis began to weep, but Rabbi Akiva laughed. They said to him: “Akiva, you never cease to amaze us. We are crying, and you laugh!” But Rabbi Akiva said, “And you, why are you crying?”

The rabbis responded: “What? Shall we not weep? The place about which Scripture states (Bamidbar 1:51), ‘And the stranger who draws close shall die,’ has become a den of foxes! Indeed, this is a fulfillment of the verse, ‘For Mount Zion which lies desolate, foxes prowl over it’ (Eikha 5:18).”

Rabbi Akiva answered them: “This is exactly why I laugh. For just as we have seen the prophecies of Jerusalem’s destruction have come to pass, so too, know that the prophecies of her future consolation shall also be fulfilled. I laughed because I remembered the verses (Zekharya 8:4–5), ‘Old men and old women will once again sit in the streets of Jerusalem, each with his staff in his hand because of advanced age; and the city will be filled with boys and girls playing in its streets.’ The Holy One, blessed be He, has declared that just as the first prophecies have been fulfilled, so shall the latter. I am joyous that the first have already come to pass, for the latter shall be fulfilled in the future.”

1. What do you think is the connection between the message of this Midrash and the message in The Core Idea above?

2. Is it hard to have the faith in God and Jewish history displayed by Rabbi Akiva in this Midrash? Do you find this difficult or easy for yourself?

God’s speech to Moshe that delivers the world-changing idea discussed in The Core Idea, in Exodus 6:2-8, is breathtaking in its grandeur and literary structure. But what will concern us – as it has successive generations of interpreters – is the proposition signalled at the outset: “I appeared to Abraham, to Isaac, and to Jacob as the Lord Almighty, but by My name God I was not known to them.” A fundamental distinction is being made between the experience the patriarchs had of God, and the experience the Israelites are about to have. Something new, unprecedented, is about to happen. What is it?

Clearly it has to do with the names by which God is known. The verse distinguishes between E-l Shaddai (“the Lord Almighty”) and the four-letter name of God which, because of its sanctity, Jewish tradition referred to simply as Hashem – “the name” par excellence (which is translated above simply as “God”).

As the classic Jewish commentators point out, the verse must be read with great care. It does not say that the patriarchs “did not know” this name; nor does it say that God did not “make this name known” to them. The four-letter name appears no less than 165 times in the book of Genesis. God Himself uses the phrase “I am Hashem” to both Abraham (Genesis 15:7) and Jacob (Genesis 28:13).

For the Sages of the Midrash, Hashem signified the divine attribute of compassion: God said to Moshe, “You wish to know My name? I am called according to My deeds…When I judge creatures, I am called Elokim. When I wage war against the wicked I am called ‘Lord of hosts.’ When I suspend judgment for man’s sins I am called E-l Shaddai. When I am merciful towards My world I am called Hashem.”

For Judah Halevi and Nahmanides, the key difference has to do with God’s acts within and beyond nature. This is how Halevi puts it in The Kuzari: This is perhaps what the Bible means when it says, “and I appeared to Abraham…as E-l Shaddai,” namely, in the way of power and dominion…. He did not, however, perform any miracle for the patriarchs as he did for Moshe.

Rashi’s explanation is the simplest and most elegant: I was not recognised by them in My attribute of “keeping faith,” (implied by My name “Hashem,”), namely that I am faithful to fulfil My word, for I made promises to them but I did not fulfil them [during their lifetime].

Something was about to change. The patriarchs had received the covenantal promise. They would become a nation. They would inherit a land. None of this, however, happened in their lifetime. To the contrary, as the Book of Genesis reaches its close, the family of the patriarchs numbers a mere seventy souls and they are in exile in Egypt. Now, the fulfilment is about to begin. Already, in the first chapter of the Book of Exodus, we hear, for the first time, the phrase Am Bnei Yisrael, “the people of the children of Israel” (Exodus 1:9). Israel has at last become, not merely a family, but a nation. Moshe at the burning bush has been told, by God, that He will bring them to “a good and spacious land, a land flowing with milk and honey” (Exodus 3:8). Hashem therefore means the God who acts in history to fulfil His promises.

At the heart of most visions of the human condition is what Mircea Eliade (in his book Cosmos and History) calls “the terror of history.” The passage of time, with its disasters, its apparent randomness, its radical contingency, is profoundly threatening to the human search for order and coherence. There seems to be no meaning in history. We live, we die, and it is as if we had never been. The universe gives no sign of any interest in our existence. If that was so in ancient times, when people believed in the existence of gods, how much more so is it true today for those neo-Darwinians who see life as no more than the operation of “chance and necessity” (Jacques Monod) or “the blind watchmaker” (Richard Dawkins). Time seems to obliterate all meaning. Nothing lasts. Nothing endures.

In ancient Israel, by contrast, “for the first time, the prophets placed a value on history…For the first time, we find affirmed and increasingly accepted the idea that historical events have a value in themselves, insofar as they are determined by the will of God…Historical facts thus become situations of man in respect to God, and as such they acquire a religious value that nothing had previously been able to confer on them. It may, then, be said with truth that the Hebrews were the first to discover the meaning of history as the epiphany of God.” Judaism is the escape into history, the unique attempt to endow events with meaning, and to see in the chronicles of mankind something more than a mere succession of happenings – to see them as nothing less than a drama of redemption in which the fate of a nation reflects its loyalty or otherwise to a covenant with God.

Some 3,300 years ago, God told Moshe that He would intervene in the arena of time, not only (though primarily) to rescue the Israelites but also “so that My name may be declared throughout the world” (Exodus 9:16). The script of history would bear the mark of a hand – not human, but divine. And it began with these words: “Therefore say to the Israelites: I am God, and I will bring you out from under the yoke of the Egyptians.”

Somewhere in the tale of Jewish survival was a mystery of great significance… there was one people whose history broke all the rules… [the] encounter with the Jewish story [suggests] the important idea that God might be found not only in nature but in history.And if we search for revelation in history, we will find it, more compellingly than anywhere else, in the history of that unusual people, our ancestors. For almost two thousand years Jews remained a distinctive nation without any of the usual prerequisites of nationhood. They had no land, no sovereignty, no power, no overarching political structures, not even a shared culture. They were scattered over the face of the earth and almost everywhere they were a minority. For the most part they refused active efforts to convert them, and resisted the passive pull of assimilation. No other people kept its identity intact for so long in such circumstances.

Radical Then, Radical Now, p.33-36 (also published as A Letter in the Scroll)

1. When you learn Jewish history, do you find that it challenges your faith in God or strengthens it?

2. What is the most powerful period of Jewish history that strengthens your faith?