The Duality of Camp and Congregation 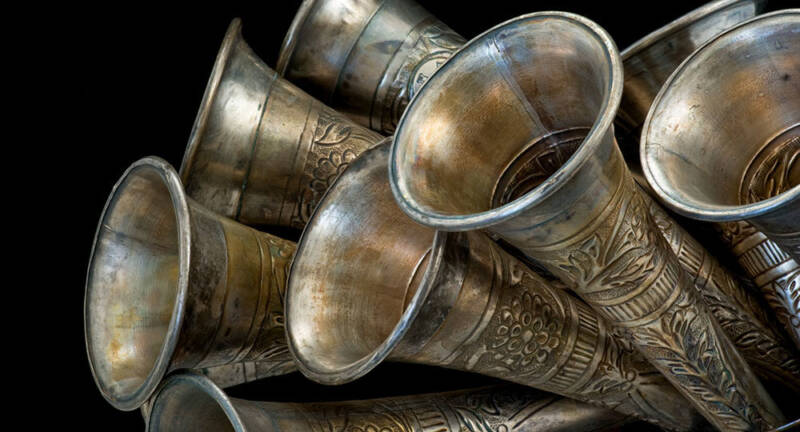 The parsha of Beha’alotecha speaks about the silver trumpets – clarions – Moses was commanded to make:

The Lord spoke to Moses, saying, “Make two trumpets of silver; make them of hammered work. They shall serve you to summon the congregation [edah] and cause the camps [machanot] to journey.”

This apparently simple passage became a springboard for one of the most profound meditations of the late Rabbi Joseph Soloveitchik. It appears in his great essay Kol Dodi Dofek, on the Jewish approach to suffering.[1]

There are, says Rabbi Soloveitchik, two ways in which people become a group – a community, society, or nation. The first is when they face a common enemy. They band together for mutual protection. Like all animals who come together in herds or flocks to defend themselves against predators, we do this for our survival. Such a group is a machaneh – a camp, a defensive formation.

There is another, quite different, form of association. People can come together because they share a vision, an aspiration, a set of ideals. This is the meaning of edah, congregation. Edah is related to the word ed, witness. Edot (as opposed to chukim and mishpatim) are the commands that testify to Jewish belief – as Shabbat testifies to creation, Passover to the Divine involvement in history, and so on. An edah is not a defensive formation but a creative one. People join together to do what none could achieve alone. A true congregation is a society built around a shared project, a vision of the common good, an edah.

Rabbi Soloveitchik says these are not just two types of group, but in the most profound sense, two different ways of existing and relating to the world. A camp is brought into being by what happens to it from the outside. A congregation comes into existence by internal decision. The former is reactive, the latter proactive. The first is a response to what has happened to the group in the past. The second represents what the group seeks to achieve in the future. Whereas camps exist even in the animal kingdom, congregations are uniquely human. They flow from the human ability to think, speak, communicate, envision a society different from any that has existed in the past, and to collaborate to bring it about.

Jews are a people in both of these two quite different ways. Our ancestors became a machaneh in Egypt, forged together by a crucible of slavery and suffering. They were different. They were not Egyptians. They were Hebrews – a word which probably means “on the other side,” “an outsider.” Ever since, Jews have known that we are thrown together by circumstance. We share a history all too often written in tears. Rabbi Soloveitchik calls this the covenant of fate (brit goral).

This is not a purely negative phenomenon. It gives rise to a powerful sense that we are part of a single story – that what we have in common is stronger than the things that separate us:

Our fate does not distinguish between rich and poor…[or] between the pietist and the assimilationist. Even though we speak a plethora of languages, even though we are inhabitants of different lands…we still share the same fate. If the Jew in the hovel is beaten, then the security of the Jew in the palace is endangered. “Do not think that you, of all the Jews, will escape with your life by being in the king’s palace” (Esther. 4:13).

Rosenberg, Theological and Halachic Reflections on the Holocaust, p. 84.

Our shared community’s fate leads also to a sense of shared suffering. When we pray for the recovery of a sick person, we do so “among all the sick of Israel.” When we comfort a mourner, we do so “among all the other mourners of Zion and Jerusalem.” We weep together. We celebrate together. This in turn leads to shared responsibility: “All Israel are sureties for one another.”[2] And this leads to collective action in the field of welfare, charity, and deeds of loving kindness. As Maimonides puts it:

All Israelites …are like brothers, as it is said, “You are children of the Lord your God” (Deut. 14:1). If brother shows no compassion to brother, who will? …Their eyes are therefore lifted to their brothers.[3]

All these are dimensions of the covenant of fate, born in the experience of slavery in Egypt. But there is an additional element of Jewish identity. Soloveitchik calls this the covenant of destiny (brit ye’ud) – entered into at Mount Sinai. This defines the people of Israel not as the object of persecution but the subject of a unique vocation, to become “a kingdom of priests and a holy nation” (Ex. 19:6).

Under this covenant, we became defined not by what others do to us but by the task we have undertaken, the role we have chosen to play in history. In Egypt we did not choose to become slaves, that was a fate thrust upon us by someone else. We did, however, choose to become God’s people at Sinai when said, “We will do and obey” (Ex. 24:7). Destiny, call, vocation, purpose, task: these create not a machaneh but an edah, not a camp but a congregation.

Our task as a people of destiny is to bear witness to the presence of God – through the way we lead our lives (Torah) and the path we chart as a people across the centuries (history).

G. K. Chesterton once wrote that “America is the only nation in the world that is founded on a creed.”[4] Chesterton was notoriously antisemitic, and this evidently prevented him from recalling that the reason America was founded on a creed was that its founders, Puritans all, were steeped in what they called the Old Testament. They took as their model the covenant made between God and the Israelites at Sinai, and it was this that linked nationhood and the idea of a specific task or mission. Herman Melville gave this one of its classic expressions in his 1849 novel, White-Jacket:

We Americans are the peculiar, chosen people – the Israel of our time; we bear the ark of the liberties of the world…. God has predestined, mankind expects, great things from our race; and great things we feel in our souls. The rest of the nations must soon be in our rear. We are pioneers of the world; the advance-guard, sent on through the wilderness of untried things, to break a new path in the New World that is ours.

It is the concept of covenant that gives Jewish (and American) identity this strange dual character. Nations are usually forged through long historical experience, through what happens to them – rather than what they consciously set themselves to do. They fall into the category of machaneh. Religions, on the other hand, are defined in terms of beliefs and a sense of mission. Each is constituted as an edah. What is unique about Judaism is the way it brings together these separate and quite distinct ideas. There are nations that contain many religions and there are religions that are spread over many nations, but only in the case of Judaism do religion and nation coincide.

This has had remarkable consequences. For almost two thousand years Jews were scattered throughout the world, yet they saw themselves (and were seen by others) as a nation – the world’s first global nation. It was a nation held together not by geographical proximity or any other of the normal accompaniments of nationhood. Jews did not speak the same vernacular. Rashi spoke French, Maimonides Arabic. Rashi lived in a Christian culture, Maimonides in a Muslim one. Nor was their fate the same. While the Jews of Spain were enjoying their Golden Age, the Jews of northern Europe were being massacred in the Crusades. In the fifteenth century, when the Jews of Spain were being persecuted and expelled, those of Poland were enjoying a rare spring of tolerance.

What held Jews together during these centuries was shared faith. In the trauma that accompanied European Emancipation and the subsequent rise of racial antisemitism, many Jews lost that faith. Yet the events of the past century – persecution, pogroms, and the Holocaust, followed by the birth of the State of Israel and the constant fight to survive against war and terror – tended to bind Jews together in a covenant of fate in the face of the hostility of the world. So when Jews were divided by fate they were united by faith, and when they were divided by faith they were united again by fate. Such is the irony, or the providential nature, of Jewish history.

Judaism in the past two centuries has fissured and fractured into different edot: Orthodox and Reform, religious and secular, and the many subdivisions that continue to atomise Jewish life into non-communicating sects and subcultures. Yet in times of crisis we are still capable of heeding the call of collective responsibility, knowing as we do that Jewish fate tends to be indivisible. No Jew, to paraphrase John Donne, is an island, entirely to him- or herself. We are joined by the gossamer strands of collective memory, and these can sometimes lead us back to a sense of shared destiny.

So, a camp and a congregation. Judaism is both. This duality was given its first expression this week in Beha’alotecha, with the command: “Make two trumpets of silver; make them of hammered work. They shall serve you to summon the congregation [edah], and cause the camps [machanot] to journey.” Sometimes the clarion call speaks to our sense of faith. We are God’s people, His emissaries and ambassadors, charged with making His presence real in the world by healing deeds and holy lives. At other times the trumpet that sounds and summons us is the call of fate: Jewish lives endangered in Israel or the Diaspora by the unremitting hostility of those who call themselves children of Abraham yet claim that they, not we, are his true heirs.

Whichever sound the silver instruments make, they call on that duality that makes Jews and Judaism inseparable. However deep the divisions between us, we remain one family in fate and faith. When the trumpet sounds, it sounds for us.