The Counterpoint of Leadership 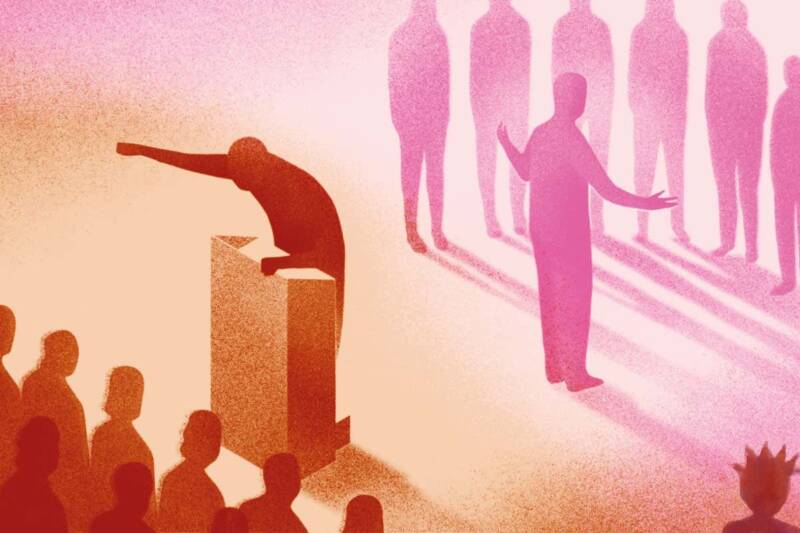 One of the most important Jewish contributions to our understanding of leadership is its early insistence of what, in the eighteenth century, Montesquieu called “the separation of powers”[1]. Neither authority nor power was to be located in a single individual or office. Instead, leadership was divided between different kinds of roles.

One of the key divisions – anticipating by millennia the “separation of church and state” – was between the King, the head of state, on the one hand, and the High Priest, the most senior religious office, on the other.

This was revolutionary. The Kings of Mesopotamian city states and the Pharaohs of Egypt were considered demigods or chief intermediary with the gods. They officiated at supreme religious festivals. They were regarded as the representatives of heaven on earth.

In Judaism, by stark contrast, monarchy had little or no religious function (other than the recital by the King of the book of the covenant every seven years in the ritual known as hakhel.) Indeed the chief objection to the Hasmonean Kings on the part of the Sages was that they broke this ancient rule, some of them declaring themselves High Priests also. The Talmud records the objection: “Let the crown of kingship be sufficient for you. Leave the crown of priesthood to the sons of Aaron.” (Kiddushin 66a) The effect of this principle was to secularise power.[2]

No less fundamental was the division of religious leadership itself into two distinct functions: that of the Prophet and the Priest. That is dramatised in this week’s parsha, focussing as it does on the role of the Priest to the exclusion of that of the Prophet. Tetzaveh is the first parsha since the beginning of the book of Exodus in which Moses’ name is missing. It is supremely the priestly, as opposed to prophetic, parsha.

Priests and Prophets were very different in their roles, despite the fact that some Prophets, most famously Ezekiel, were Priests also. The primary distinctions were:

1. The role of Priest was dynastic, that of Prophet was charismatic. Priests were the sons of Aaron. They were born into the role. Parenthood had no part in the role of the Prophet. Moses’ own children were not Prophets.

2. The Priest wore robes of office. There was no official uniform for a Prophet.

3. The priesthood was exclusively male; not so prophecy. The Talmud lists seven women who were Prophets: Sarah, Miriam, Deborah, Hannah, Abigail, Huldah and Esther.

4. The role of the Priest did not change over time. There was a precise annual timetable of sacrifices that did not vary from year to year. The Prophet by contrast could not know what their mission would be until God revealed it to them. Prophecy was never a matter of routine.

5. As a result, Prophet and Priest had different senses of time. Time for the Priest was what it was for Plato: the “moving image of eternity,”[3] a matter of everlasting recurrence and return. The Prophet lived in historical time. Their today was not the same as yesterday and tomorrow would be different again. One way of putting this is that the Priest heard the word of God for all time. The Prophet heard the word of God for this time.

6. The Priest was “holy” and therefore set apart from the people. He had to eat his food in a state of purity, and had to avoid contact with the dead. The Prophet by contrast often lived among the people and spoke a language they understood. Prophets could come from any social class.

7. The key words for the Priest were tahor, tamei, kodesh and chol: “pure”, “impure”, “sacred”, and “secular”. The key words for the Prophets were tzedek, mishpat, chessed and rachamim: “righteousness”, “justice”, “love”, and “compassion”. It is not that the Prophets were concerned with morality while the Priests were not. Some of the key moral imperatives, such as “You shall love your neighbour as yourself,” come from priestly sections of the Torah. It is rather that Priests think in terms of a moral order embedded in the structure of reality, sometimes called a “sacred ontology.”[4] Prophets tended to think not of things or acts in themselves but in terms of relationships between persons or social classes.

8. The task of the Priest is boundary maintenance. The key priestly verbs are le-havdil and le-horot, to distinguish one thing from another and apply the appropriate rules. Priests gave rulings, Prophets gave warnings.

9. There is nothing personal about the role of a Priest. If one – even a High Priest – was unable to officiate at a given service, another could be substituted. Prophecy was essentially personal. The Sages said that “no two Prophets prophesied in the same style” (Sanhedrin 89a). Hosea was not Amos. Isaiah was not Jeremiah. Each Prophet had a distinctive voice.

10. Priests constituted a religious establishment. The Prophets, at least those whose messages have been eternalised in Tanach, were not an establishment but an anti-establishment, critical of the powers-that-be.

The roles of Priest and Prophet varied over time. The Priests always officiated at the sacrificial service of the Temple. But they were also Judges. The Torah says that if a case is too difficult to be dealt with by the local court, you should “Go to the Priests, the Levites, and to the Judge who is in office at that time. Inquire of them and they will give you the verdict” (Deut. 17:9). Moses blesses the tribe of Levi saying that “They will teach Your ordinances to Jacob and Your Torah to Israel” (Deut. 33:10), suggesting that they had a teaching role as well.

Malachi, a Prophet of the Second Temple period, says: “For the lips of a Priest ought to preserve knowledge, because he is the messenger of the Lord Almighty and people seek instruction from his mouth” (Mal. 2:7). The Priest was guardian of Israel’s sacred social order.

Yet it is clear throughout Tanach that the priesthood was liable to corruption. There were times when Priests took bribes, others when they compromised Israel’s faith and performed idolatrous practices. Sometimes they became involved in politics. Some held themselves as an elite apart from and disdainful toward the people as a whole.

The priesthood became massively politicised and corrupted during the Hellenistic era, especially under the Seleucids in the second century BCE. Hellenised High Priests like Jason and Menelaus introduced idolatrous practises, even at one stage a statue of Zeus, into the Temple. This provoked the internal revolt that led to the events we recall on the festival of Chanukah.

Yet despite the fact that the initiator of the revolt, Mattityahu, was himself a righteous Priest, corruption re-emerged under the Hasmonean Kings. The Qumran sect known to us through the Dead Sea Scrolls was particularly critical of the priesthood in Jerusalem. It is striking that the Sages traced their spiritual ancestry to the Prophets, not the Priests (Avot 1:1).

The Kohanim were essential to ancient Israel. They gave the religious life its structure and continuity, its rituals and routines, its festivals and celebrations. Their task was to ensure that Israel remained a holy people with God in its midst. But they were an establishment, and like every establishment, at best they were the guardians of the nation’s highest values, but at worst they became corrupt, using their position for power and engaging in internal politics for personal advantage. That is the fate of establishments, especially those whose membership is a matter of birth.

That is why the Prophets were essential. They were the world’s first social critics, mandated by God to speak truth to power. Still today, for good or otherwise, religious establishments always resemble Israel’s priesthood. Who, though, are Israel’s prophets at the present time?

The essential lesson of the Torah is that leadership can never be confined to one class or role. It must always be distributed and divided. In ancient Israel, Kings dealt with power, Priests with holiness, and Prophets with the integrity and faithfulness of society as a whole. In Judaism, leadership is less a function than a field of tensions between different roles, each with its own perspective and voice.

Leadership in Judaism is counterpoint, a musical form defined as “the technique of combining two or more melodic lines in such a way that they establish a harmonic relationship while retaining their linear individuality.”[5] It is this internal complexity that gives Jewish leadership its vigour, saving it from entropy, the loss of energy over time.

Leadership must always, I believe, be like this. Every team must be made up of people with different roles, strengths, temperaments and perspectives. They must always be open to criticism and they must always be on the alert against groupthink. The glory of Judaism is its insistence that only in heaven is there one commanding Voice. Down here on earth no individual may ever hold a monopoly of leadership.

Out of the clash of perspectives – King, Priest and Prophet – comes something larger than any individual or role could achieve.

[1] Charles-Louis Montesquieu, The Spirit of Laws (Encyclopaedia Britannica, 1952).
[2] In Judaism, power, except that exercised by God, is not holy.
[3] Plato, Timaeus 37d.
[4] On this rather difficult idea, see Philip Rieff, My Life Among the Deathworks (Charlottesville, Va.: University of Virginia Press, 2006). Rieff was an unusual and insightful critic of modernity. For an introduction to his work, see Antonius A.W. Zondervan, Sociology and the Sacred: An Introduction to Philip Rieff’s Theory of Culture (Toronto, Ontario: University of Toronto Press, 2005).
[5] American Heritage Dictionary, 5th ed., s.v. “Counterpoint” (Boston: Houghton Mifflin, 2011).