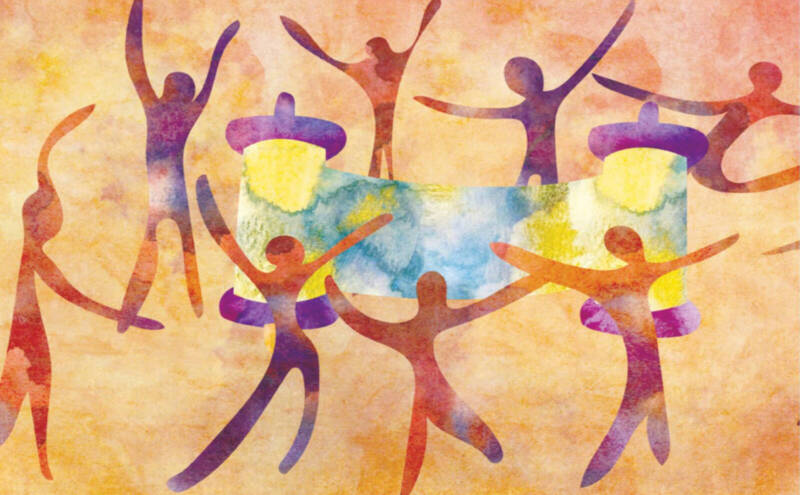 One of the most amusing scenes in Anglo-Jewish history occurred on 14 October 1663. A mere seven years had passed since Oliver Cromwell had found no legal bar to Jews living in England (hence the so-called “return” of 1656). A small synagogue was opened in Creechurch Lane in the City of London, forerunner of Bevis Marks (1701), the oldest still-extant place of Jewish worship in Britain.

The famous diarist Samuel Pepys decided to pay a visit to this new curiosity, to see how Jews conducted themselves at prayer. What he saw amazed and scandalised him. As chance or providence had it, the day of his visit turned out to be Simchat Torah. This is how he described what he saw:

And anon their Laws that they take out of the press [i.e., the Ark] are carried by several men, four or five several burthens in all, and they do relieve one another; and whether it is that every one desires to have the carrying of it, I cannot tell, thus they carried it round about the room while such a service is singing … But, Lord! to see the disorder, laughing, sporting, and no attention, but confusion in all their service, more like brutes than people knowing the true God, would make a man forswear ever seeing them more and indeed I never did see so much, or could have imagined there had been any religion in the whole world so absurdly performed as this.

This was not the kind of behaviour that Pepys was used to in a house of worship.

There is something unique about the relationship of Jews to the Torah, the way we stand in its presence as if it were a king, dance with it as if it were a bride, listen to it telling our story, and study it, as we say in our prayers, as “our life and the length of our days.” There are few more poignant lines of prayer than the one contained in a poem said at Neilah, at the end of Yom Kippur: Ein shiyur rak haTorah hazot – “Nothing remains,” after the destruction of the Temple and the loss of the land, “but this Torah.” A book, a scroll, was all that stood between Jews and despair.

What non-Jews (and sometimes Jews) fail to appreciate is how, in Judaism, Torah represents law as love, and love as law. Torah is not just “revealed legislation”.[1] It represents God’s faith in our ancestors that He entrusted them with the creation of a society that would become a home for His Presence and an example to the world.

One of the keys as to how this worked is contained in the parsha of Bamidbar, always read before Shavuot, the commemoration of the Giving of the Torah. This reminds us how central is the idea of wilderness – the desert, no man’s land – is to Judaism. It is midbar, wilderness, that gives our parsha and the book as a whole its name. It was in the desert that the Israelites made a covenant with God and received the Torah, their constitution as a nation under the sovereignty of God. It is the desert that provides the setting for four of the five books of the Torah, and it was there that the Israelites experienced their most intimate contact with God, who sent them water from a rock, manna from heaven and surrounded them with Clouds of Glory.

What story is being told here? The Torah is telling us three fundamentals to Jewish identity. First is the unique phenomenon that, in Judaism, the law preceded the land. For every other nation in history the reverse was the case. First came the land, then human settlements, first in small groups, then in villages, towns and cities. Then came forms of order and governance and a legal system: first the land, then the law.

The fact that in Judaism the Torah was given bemidbar, in the desert, before they had even entered the land, meant that uniquely Jews and Judaism were able to survive, their identity intact, even in exile. Because the law came before the land, even when Jews lost the land they still had the law. This meant that, even in exile, Jews were still a nation. God remained their sovereign. The covenant was still in place. Even without a geography, they had an ongoing history. Even before they entered the land, Jews had been given the ability to survive outside the land.

Second, there is a tantalising connection between midbar, ‘wilderness,’ and davar, ‘word.’ Where other nations found the gods in nature – the rain, the earth, fertility, and the seasons of the agricultural year – Jews discovered God in transcendence, beyond nature, a God who could not be seen but rather heard. In the desert, there is no nature. Instead there is emptiness and silence, a silence in which one can hear the unearthly voice of the One-beyond-the-world. As Edmond Jabès put it: “The word cannot dwell except in the silence of other words. To speak is, accordingly, to lean on a metaphor of the desert.”[2]

The German-American political scientist Eric Voegelin saw this as fundamental to the completely new form of spirituality born in the experience of the Israelites:

When we undertake the exodus and wander into the world, in order to found a new society elsewhere, we discover the world as the Desert. The flight leads nowhere, until we stop in order to find our bearings beyond the world. When the world has become Desert, man is at last in the solitude in which he can hear thunderingly the voice of the spirit that with its urgent whispering has already driven and rescued him from Sheol [the domain of death]. In the Desert God spoke to the leader and his tribes; in the desert, by listening to the voice, by accepting its offer, and by submitting to its command, they had at last reached life and became the people chosen by God.[3]

In the silence of the desert Israel became the people for whom the primary religious experience was not seeing but listening and hearing: Shema Yisrael. The God of Israel revealed Himself in speech. Judaism is a religion of holy words, in which the most sacred object is a book, a scroll, a text.

Third, and most remarkable, is the interpretation the prophets gave to those formative years in which the Israelites, having left Egypt and not yet entered the land, were alone with God. Hosea, predicting a second exodus, says in God’s name regarding the Israelites:

I will lead her into the wilderness and speak tenderly to her . . .

There she will respond as in the days of her youth,

As in the day she came out of Egypt.

“I remember the devotion of your youth, how as a bride you loved Me and followed Me through the wilderness, through a land not sown.”

Shir HaShirim, The Song of Songs, contains the line, “Who is this coming up from the wilderness leaning on her beloved?” (Shir HaShirim 8:5)

Common to each of these texts is the idea of the desert as a honeymoon in which God and the people, imagined as bridegroom and bride, were alone together, consummating their union in love. To be sure, in the Torah itself we see the Israelites as a recalcitrant, obstinate people complaining and rebelling against the God. Yet the Prophets in retrospect saw things differently. The wilderness was a kind of yichud, an alone-togetherness, in which the people and God bonded in love.

Most instructive in this context is the work of anthropologist Arnold Van Gennep who focused attention on the importance of rites of passage.[4] Societies develop rituals to mark the transition from one state to the next – from childhood to adulthood, for example, or from being single to being married – and they involve three stages. The first is separation, a symbolic break with the past. The last is incorporation, re-entering society with a new identity. Between the two comes the crucial stage of transition when, having cast off one identity but not yet donned another, you are remade, reborn, refashioned.

Van Gennep used the term liminal, from the Latin word for “threshold,” to describe this transitional state when you are in a kind of no-man’s-land between the old and the new. That is what the wilderness signifies for Israel: liminal space between slavery and freedom, past and future, exile and return, Egypt and the Promised Land. The desert was the space that made transition and transformation possible. There, in no-man’s-land, the Israelites, alone with God and with one another, could cast off one identity and assume another. There they could be reborn, no longer slaves to Pharaoh, instead servants of God, summoned to become “a kingdom of priests and a holy nation.” (Ex. 19:6)

Seeing the wilderness as the space-between helps us to see the connection between the Israelites in the days of Moses and the ancestor whose name they bore. For it was Jacob among the patriarchs who had his most intense experiences of God in liminal space, between the place he was leaving and the one he was travelling to, alone and at night. It was there, fleeing from his brother Esau but not yet arrived at the house of Laban, that he saw a vision of a ladder stretching from earth to heaven with angels ascending and descending, and there on his return that he fought with a stranger from night until dawn and was given the name Israel.

The desert thus became the birthplace of a wholly new relationship between God and humankind, a relationship built on covenant, speech, and love as concretised in the Torah. Distant from the great centres of civilisation, a people found themselves alone with God and there consummated a bond that neither exile nor tragedy could break. That is the moral truth at the beating heart of our faith: that it is not power or politics that link us to God, but love.

Joy in the celebration of that love led King David to “leap and dance” when the Ark was brought into Jerusalem, earning the disapproval of King Saul’s daughter Michal (2 Sam. 6:16), and many centuries later led the Anglo-Jews of Creechurch Lane to dance on Simchat Torah, to the disapproval of Samuel Pepys. When love defeats dignity, faith is alive and well.